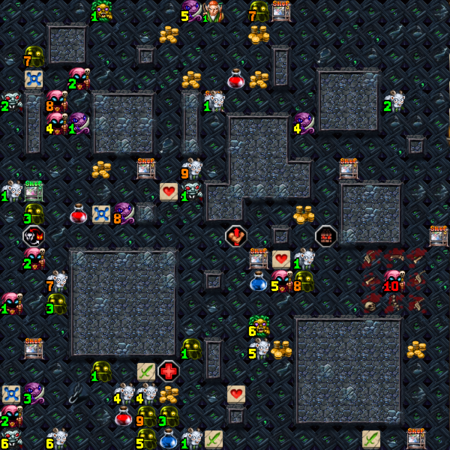 Wizard silver challenge. The challenge has a very peculiar gimmick - whenever a monster is damaged, all revealed monsters on the map (including the boss) teleport to random positions.

There are no altars in this challenge. There are the standard five glyphs (plus the Wizard's automatic fireball), one of which is guaranteed to be

Race doesn't matter too much in this challenge. Orc, surprisingly enough, is probably your best bet, as it gives a strong earlygame (the most difficult part of the challenge). For prep, the two options are Extra Mana, for the guaranteed triple fireball, or Extra Glyph, to maximize your odds of finding

The real challenge here is getting rolling. Once you've explored significant chunks of the map, the monster shuffling is an annoyance, but until that point, it's a huge challenge. The key is WONAFYT, as slowed monsters don't blink. Once you've corralled all your popcorn, your first level or two should come from killing same-level monsters. At that point, you should have enough of the map explored to start shooting for a higher-level kill. When doing so, if your target doesn't show up in visible space, you can kill a popcorn monster to shuffle everything around again for another shot at seeing your target.

The boss isn't anything special, but you need to watch out for his 99% lifesteal. Be very careful when exploring if you haven't found him, and make sure you slow him if you find a

WEYTWUT. Aside from that, he's a chump. Set up a midfight levelup, make sure to fully explore before fighting him, and you shouldn't have any trouble.