Difference between revisions of "Meat is Murder" 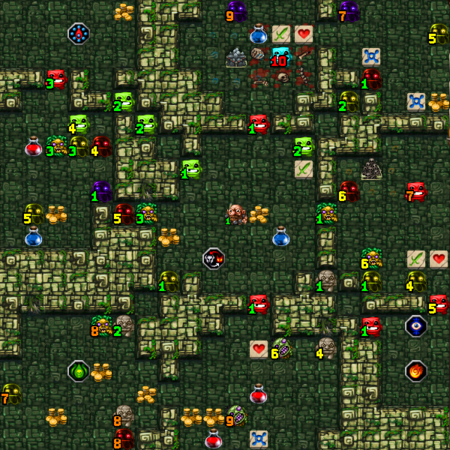 Earthmother plays as normal here, and can be a welcome reprieve from Taurog's dislike of glyph casting late game, one can consider worshipping earth mother, converting out, and then back in, because her free glyph can fuel Taurog and you have plenty of ways to gain piety for both.

Taurog is really only for his blade, shield, and armor, and as a piety farm. You are region fighting the boss so a few stacks of death protection aren't very helpful and 15% magic resistance isn't doing you any favors. Consider converting out after getting the boons you want, especially if earthmother is available.

HALPMEH can also be useful, particularly once the meat men become poisonous. One should carefully consider whether to convert these for Taurog and extra damage or keep them for the boss, because you only have space for 2 of them, and one should always be apheelsick if you can find it.

If you can get to level 6 or 7 or even 8 before fighting this thing while preserving most of the black space, do it, but once you are level five and have uncovered half the map, you should start on the boss. You will find a lot of popcorn and pickups lying around as you fight the boss, so you will get more powerful, don't worry if it is slow going at first, but eat popcorn as you find it, ideally you slowed everything already with

The Earthmother, and are getting the extra experience. If you found both Earthmother and

Taurog you should have little problem, especially with

APHEELSIK, otherwise this will be a tough, long battle, and you may end up having to retry after each fruitless attempt. It is possible to win even without both gods you want and apheelsik but if you want to make this challenge easy, reroll if you don't find that holy trinity before fighting the boss. That will save some time and pain.