In the first part of this collection we will look at Naga City. With all 9 altars and 10 bosses to kill, this dungeon is seen as an extreme. When most people see it for the first time they are usually overwhelmed, because this dungeon provides you with more options than any other dungeon. Still, no matter how daunting, every dungeon is beatable. We'll start off by looking at my preparations. 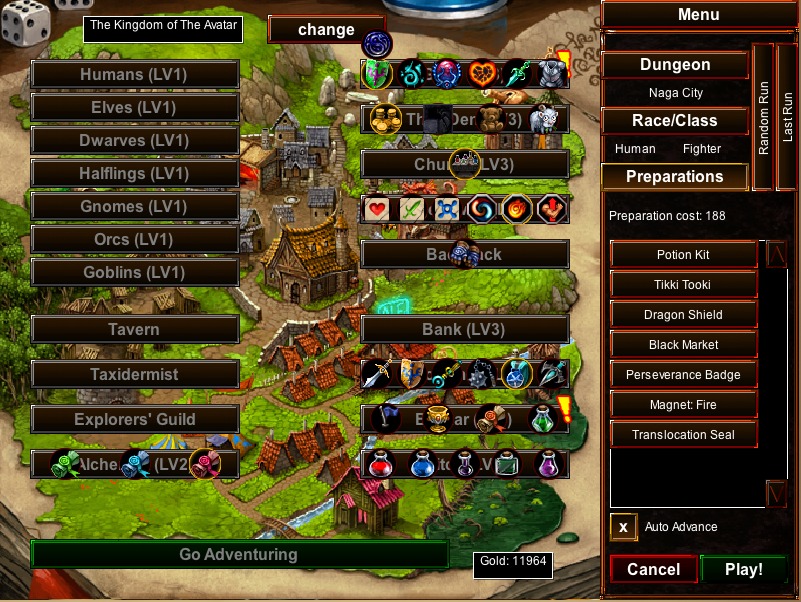 Dragon Shield: This is probably the greatest all-round preparation in the game. Unfortunately, it is gated behind a vicious dungeon. If you do not have it, I recommend you take a tri-sword instead. Actually, the tri-sword is probably better, I just didn't have it lockered. If you want to get it now, use part 2 of my mini-series to get it.
Black Market: This is more of a personal preference. Still, it helps because you can unlock more altars or sacrifice more gold to Tiki Tooki.
Tiki Tooki: This is the key element of my strategy. You'll see why later on.
Magnet: Fireball: This is essential for classes that need leverage early, and the fighter needs as fast as he can get it.
Perseverance Badge: A great prep that gives more damage and takes up little room.
Bazaar: I chose not to take any preps. Really any of them would have been fine, but I didn't need to.
Potion Kit: Health and Mana Potions are always useful. Whupaz is essential for every vicious dungeon. Reflex is always helpful. Schadenfreude is nice against the physical resist bosses.
Translocation Seal: Since I want to save money for the arena, I should steal an item to save gold. 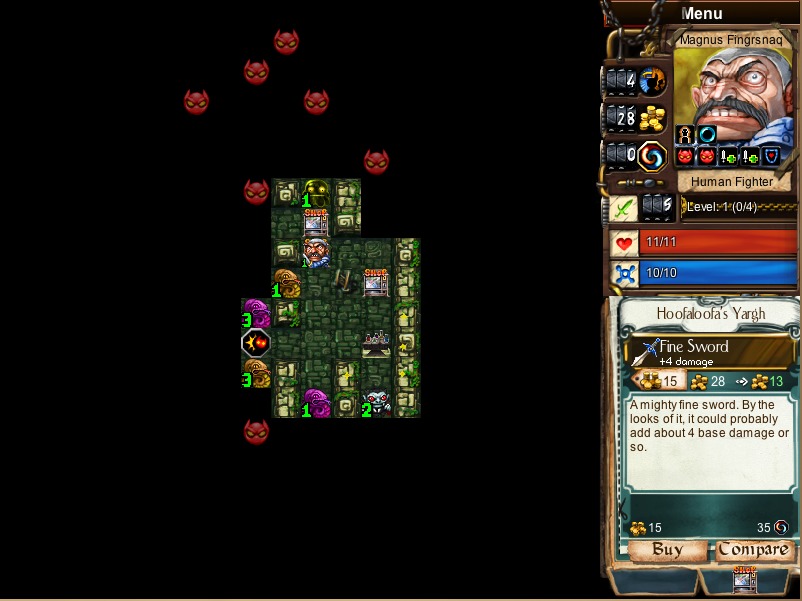 Here's my opening situation. Please note that you do NOT worship Tiki Tooki off the bat. So, what I'm about to do is buy this fine sword and attempt to kill the level 2 vampire. Now, you may be thinking, "How will he kill a level 2 vampire?" The key is burning. When you hit a monster with a fireball, it incurs one level of burning. That means three things: 1. If you fireball it again it will do one extra damage per stack of burning. 2. If you hit it or another monster, it will discharge the stacks, dealing one magic damage per stack and removing them. 3. The monsters regeneration is at a -1 per tile penalty. The third ability is INCREDIBLE at low levels. It means this level 2 vampire will regenerate at the same rate as me. Then, with my new fine sword and the BURNDAYRAZ damage, I will outlast him in a fight, as long as I reveal enough tiles. Let's see what happens: 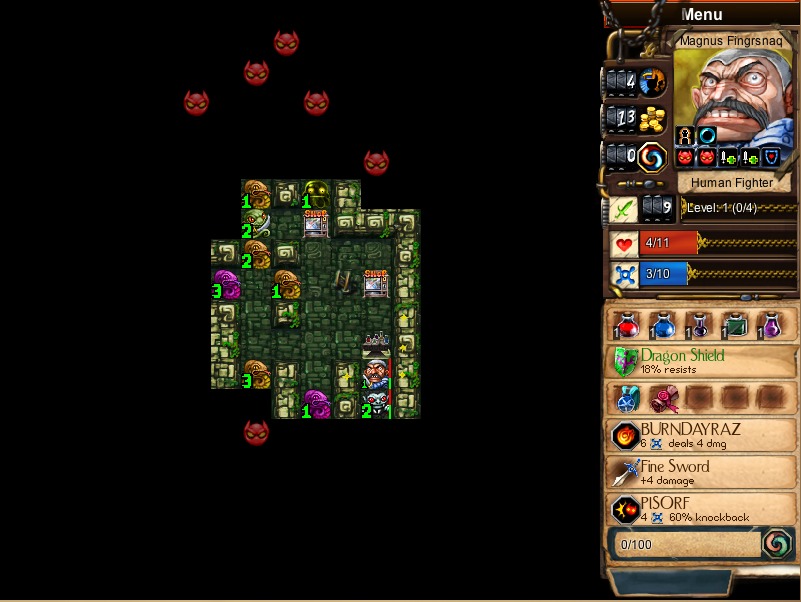 Unfortunately, while my strategy would have worked, I was quickly gridlocked in by monsters. I also picked up the PISORF glyph, but I don't have enough mana to push something away to get more blackspace. I have to use my death protection to kill it. 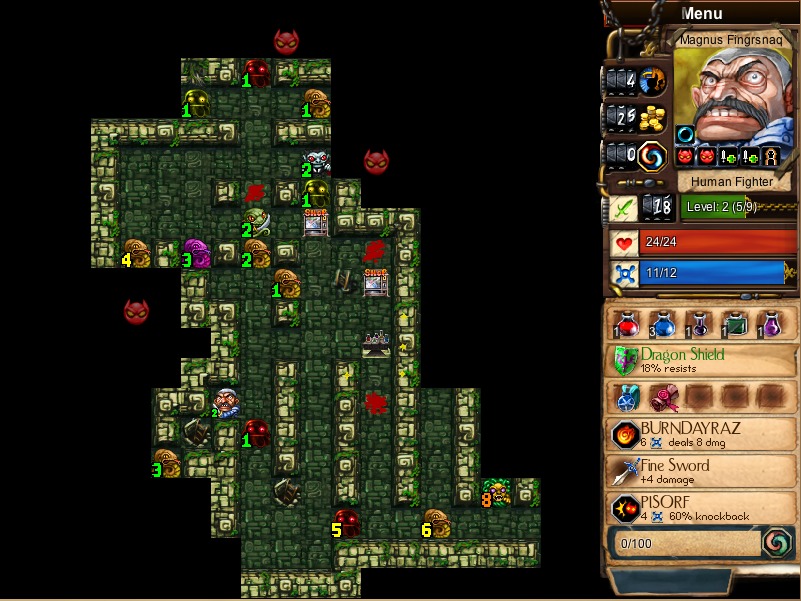 Okay, I've walked around, cleared some space and found two subdungeons. My normal subdungeon is a generic one with a sign and some gold. My secret subdungeon is filled with 20 gold piles. I am looking for a suitable target to kill right now. The snake 3 would be great (once again, use burning and then outlast them), but his poison would take out my regeneration capabilities. What to do... 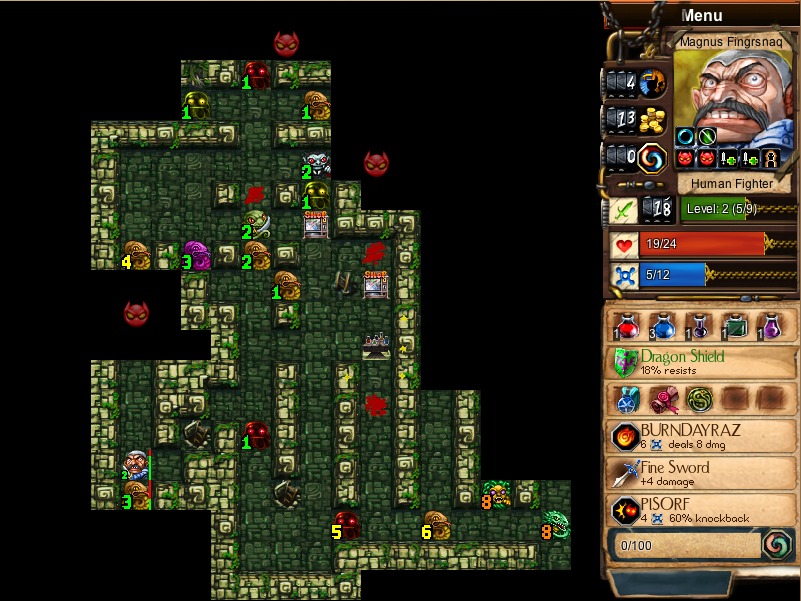 I find a shop with a venom ward and yet again forget to steal it and buy it instead. Now that made the snake an eligible target, so I use the burn-then-outlast strategy to kill him. 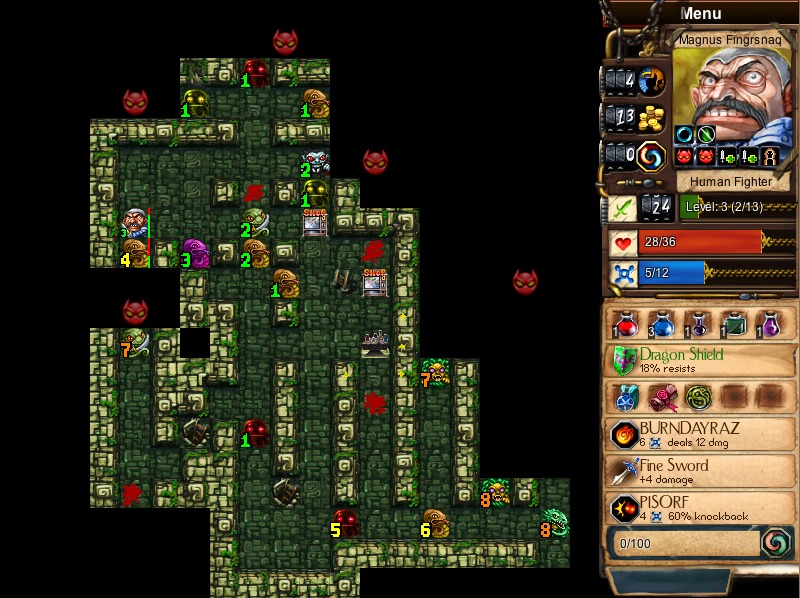 Now that I've leveled, that level four snake will fall the same way as the level three one. 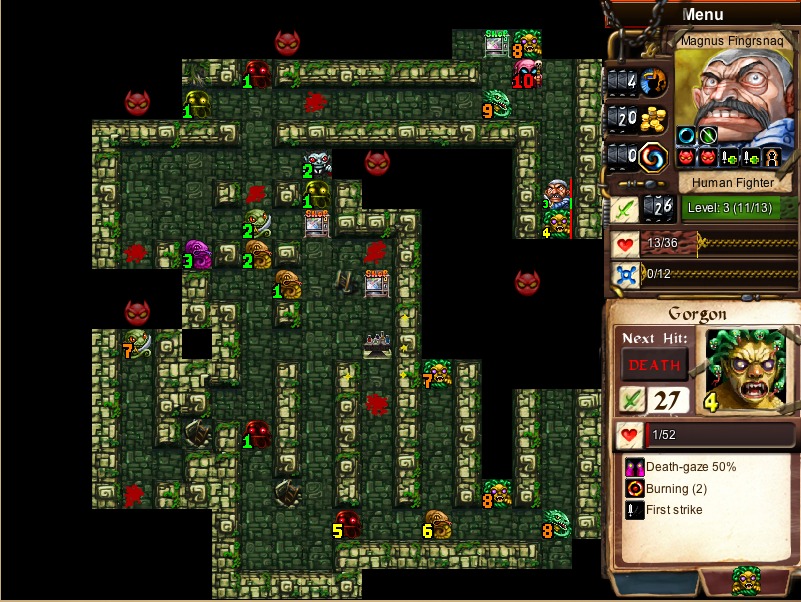 Okay, I did something different on this gorgon. I just attacked and fireballed twice. Oh no! I'm one damage off! Fortunately, I can discharge the burning by killing a level one monster. The two discharged damage will kill the gorgon and level me up! 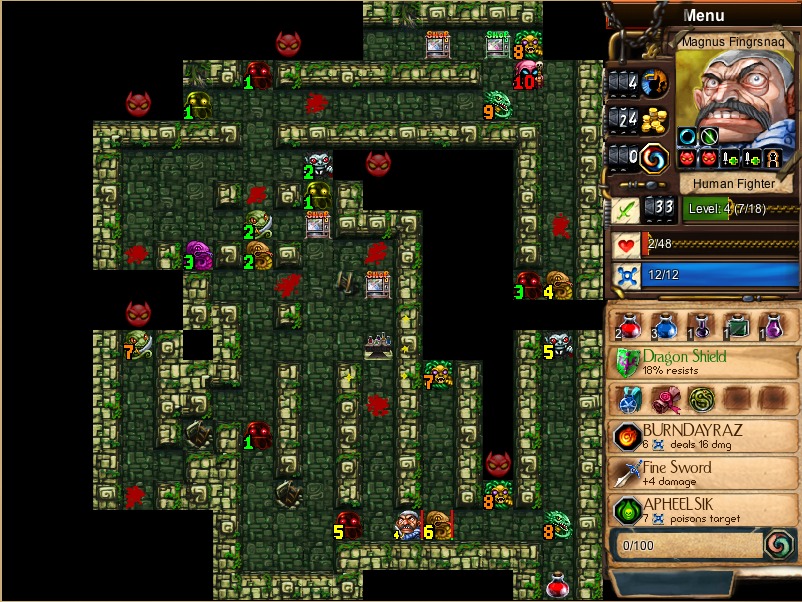 Depending on how observant you are, you may have noticed that I picked up an APHEELSIK glyph. I've used it to whittle away this level six snakes health. Now I'll kill it and level. 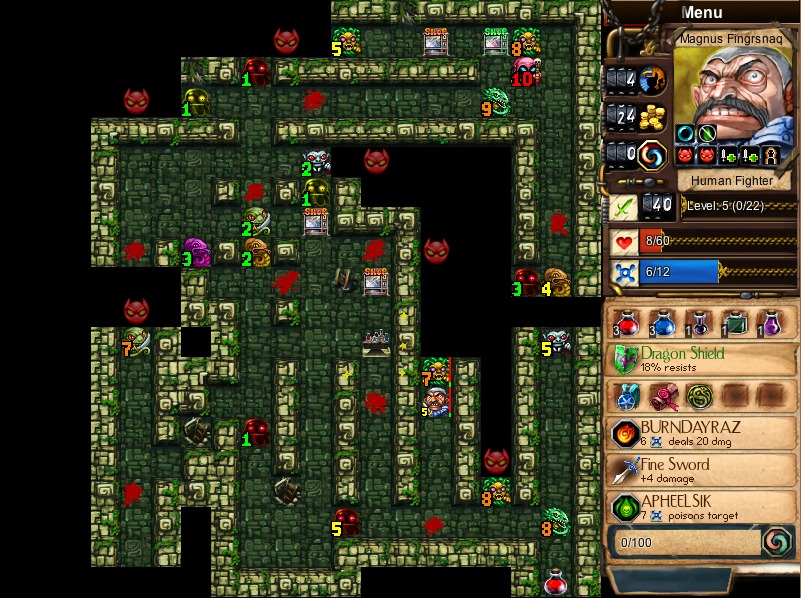 Now I'll use APHEELSIK to take out this level seven gorgon. 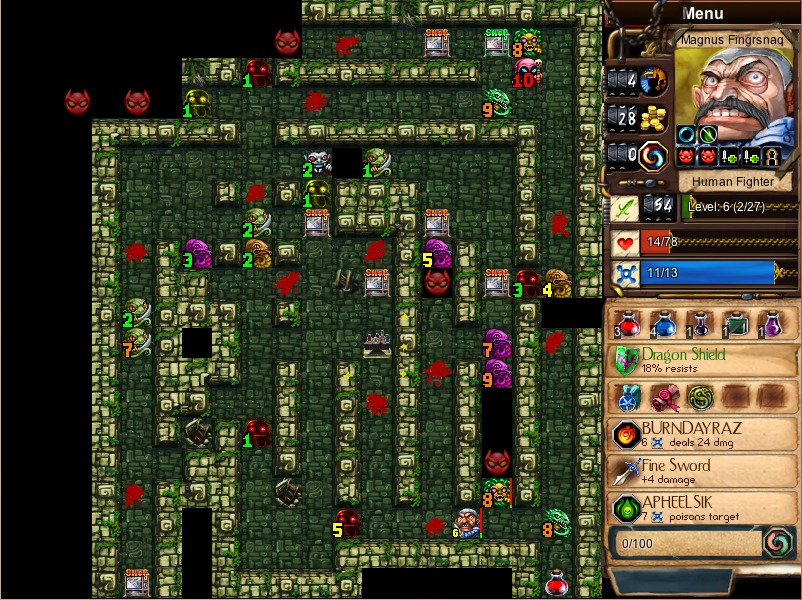 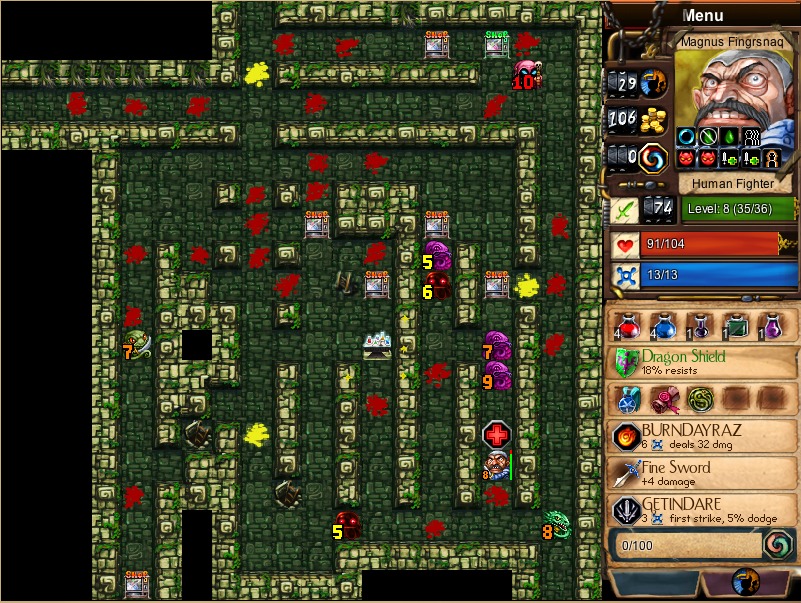 Okay, I just did a LOT of things. First, I killed the other level 8 gorgon. Then I worshipped Tiki Tooki. Then I proceeded to clean up my map a TON. With my newfound piety I bought the poison boon. While I could have cleaned up more, I wanted to have a mid-fight level up in the arena, so I abstained from killing that level five acid blob. Now that my attacks poison, I can convert APHEELSIK and pick up Tiki Tooki's free GETINDARE. 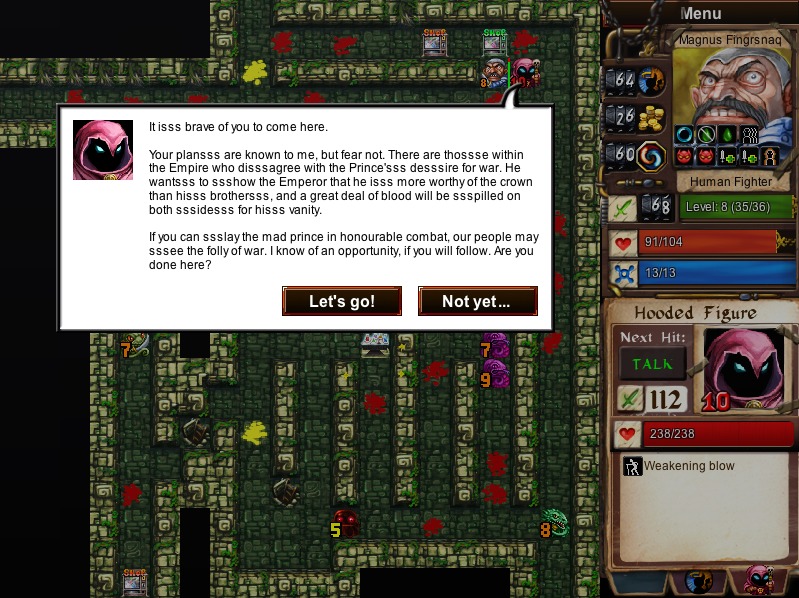 I've done two more things: I purchased Tiki's Edge and I used Tribute six times. The reason I did not use it more is that I will need 20 gold to buy an altar in the arena. Time to descend. 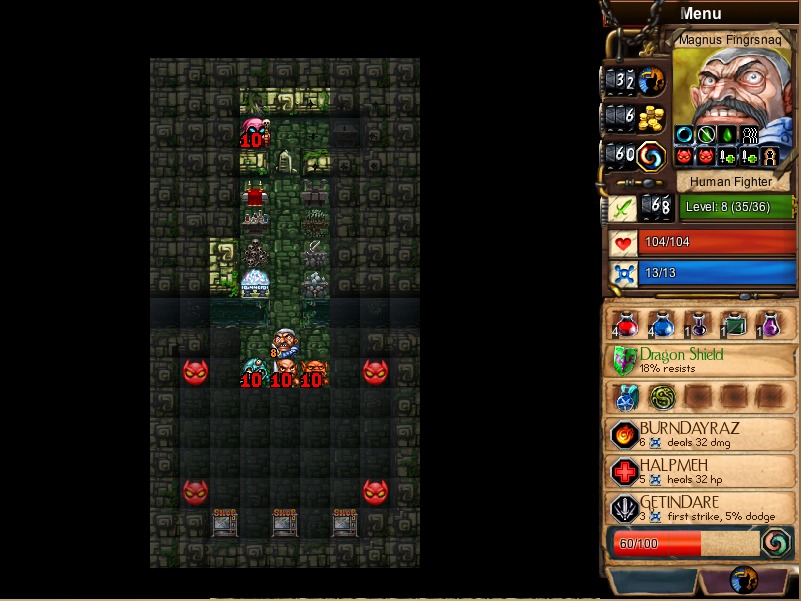 Before I go into what to do in the arena, I'll give you a little info. The arena has 2 main areas: The Prayer Room and The Arena. The Prayer Room as a bunch of purchasable altars. They cost 20 gold each. The Pactmaker altar is free. The arena has three shops. They hold a keg of mana, a keg of health and The Amulet of Yendor. In each of the four corners a monster is spawned. One is level one, one is level four, one is level six, and one is level nine, and they are automatically bloodless. There are nine bosses and then Kinisssch. The nine consist of Lord Gobb, Frank the Zombie, Tomithy Longdall, Super Meat Man, Jörmungadnr, Aequitas, The Iron Man, The Tormented One, and The Tower of Goo. They come in waves of three bosses each, and after each wave the blackspace, monsters and bosses are replenished. After you defeat the third wave, the blackspace is replenished and Kinisssch shows up on the battlefield.

Here's what I've done: I purchased Mystera Annur's altar and converted in. Why Mystera? She gives piety very easily and doesn't punish for potion use or getting hit. Taurog works too, but since I'll be using lots of spells Mystera is better. The basic formula for each boss is use poison to slowly kill them. There are a couple of exceptions:
Frank the Zombie: This is arguably the hardest boss here. You can't poison him, he has more hp than most other bosses, and still does normal damage. Use whupaz and reflex potions on him at the start, then health potions and mid-fight level ups to win.
Tomithy Longdall: Make sure you don't get messed up by his poison, make sure you have fodder for his curses, and make sure you level up when you kill him.
Jörmungadnr: Make sure his poison doesn't mess you up.
The Tormented One: Just fireball him to death. You should use mana potions and your schadenfreude.
The Tower of Goo: Fireball him as much as you can, attack him, regenerate to full mana, and repeat. 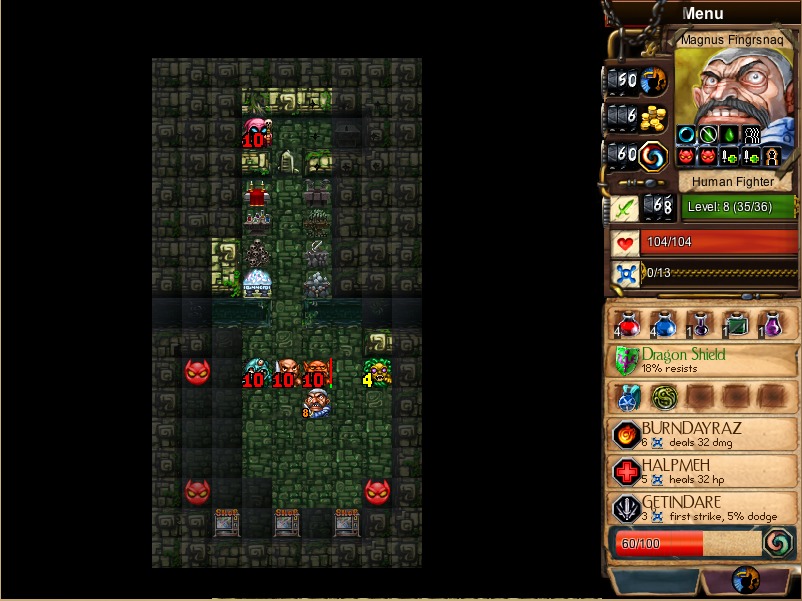 See, with my poison I'm about to kill him. 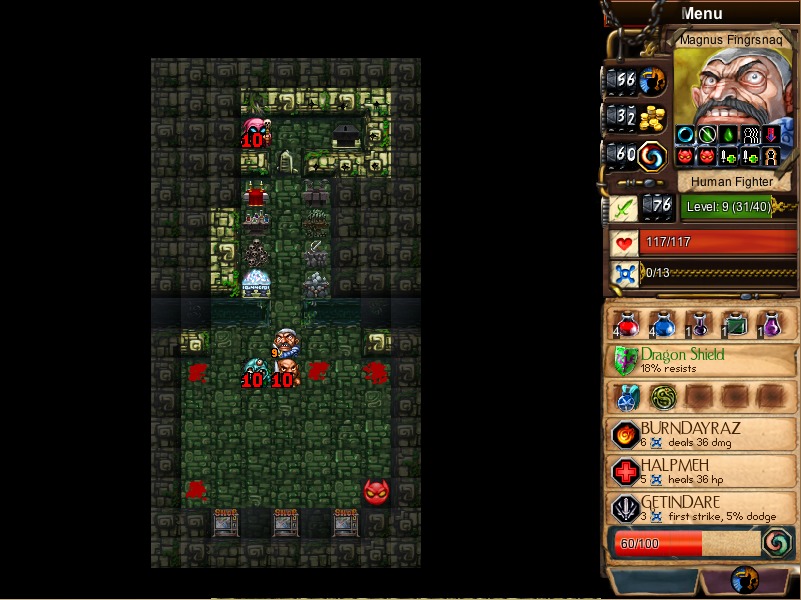 Okay, I made a mistake here. I killed my low-level monsters to make sure I would level up after I killed Tomithy. Sure that sounds great, but now I don't have any monsters to kill so that I am not cursed. 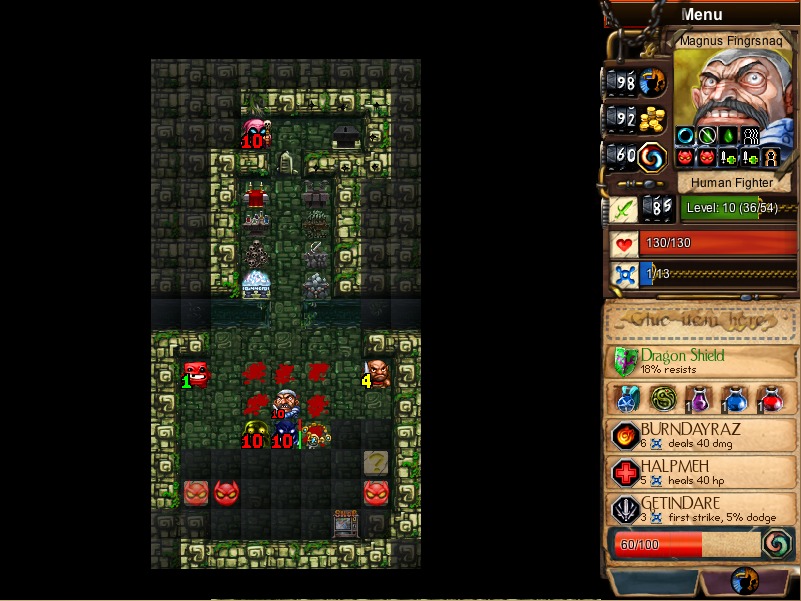 I must apologize to everyone following this playthrough. I got so sucked into the game I forgot to take pictures. Basically, I finished off all of the bosses that don't need special strategies, using mid-fight level ups and potions when I ran out of blackspace. Fairly straightforward. Back to the picture. I've hit The Tormented One with two fireballs. I use a mana potion to bring my mana to six and fireball again. Then, because I have zero mana, I throw back a schadenfreude potion and attack. Schadenfreude potions bypass mana burn. Here's how it works. The Tormented One hits me, mana burning me and reducing my mana to zero. Then, the schadenfreude potion realizes I've been hit and replenishes my mana. 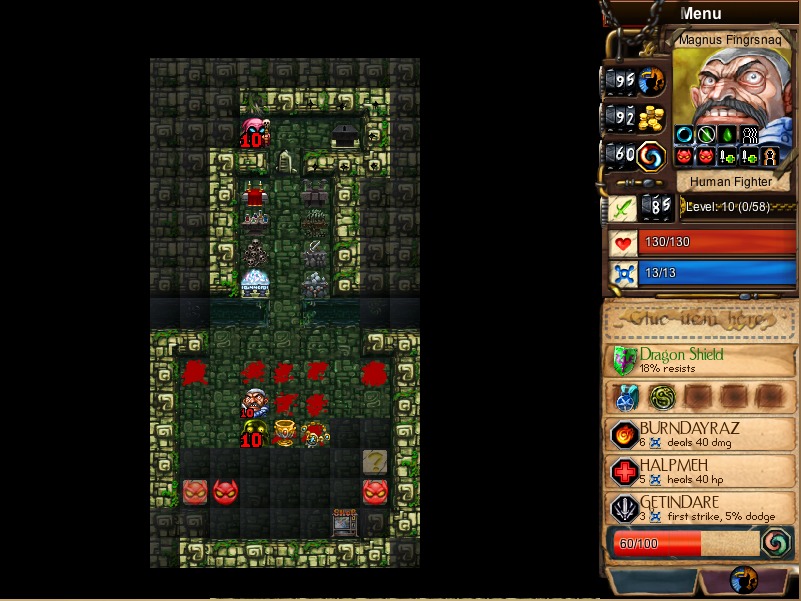 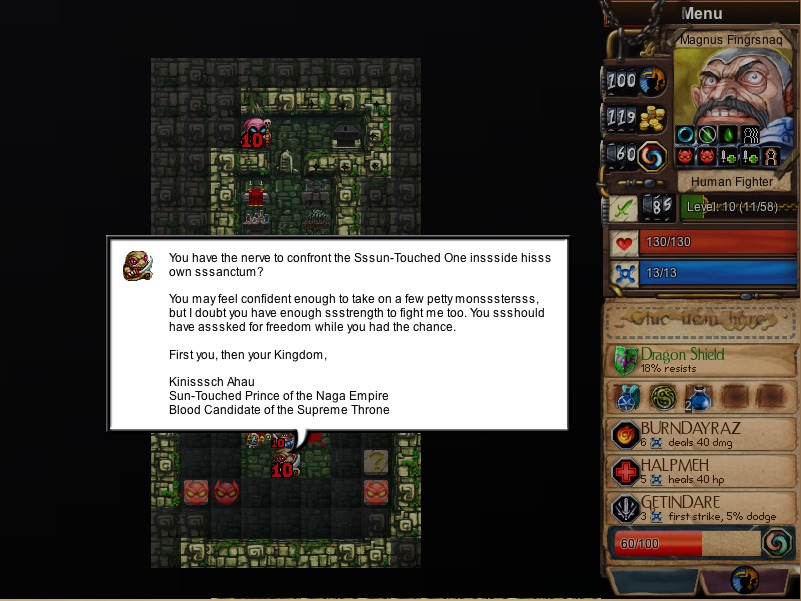 Finally! We have conquered the trials of The Spider Arena and may face the sun-touched sissy. This guy is pretty easy. He's average compared to the bosses you just fought, and you get a full arena of blackspace. Just start taking him down like any other boss. 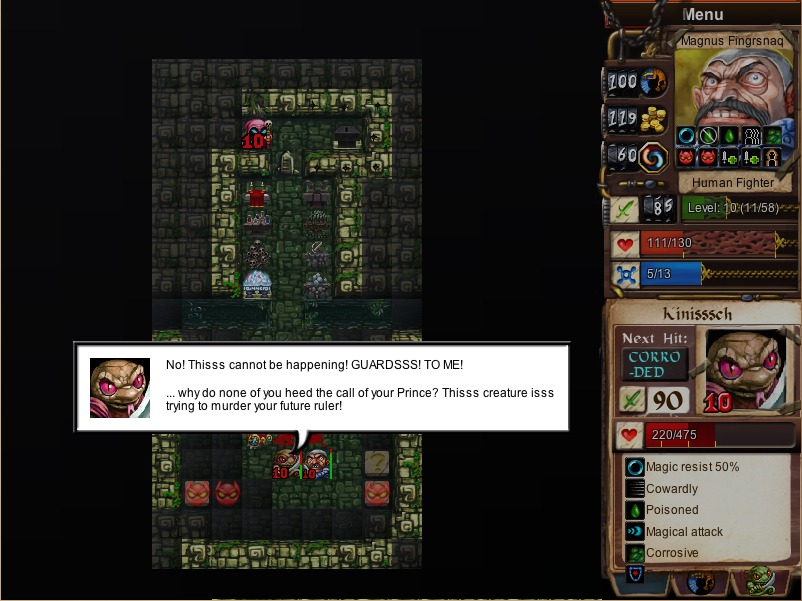 What a coward. He'll start running away now, but just continue to kill him. 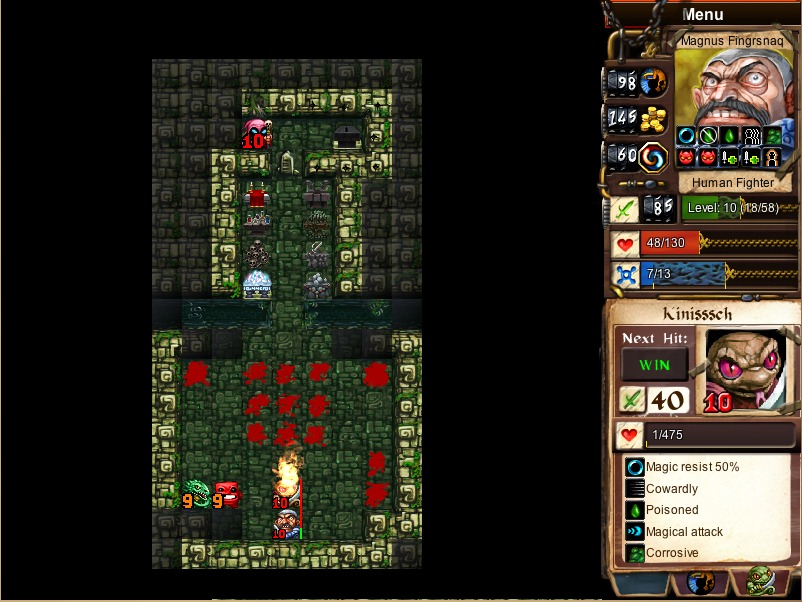 At long last, we win. This run was made before they added the unique item "Mage Fist" and the Naga Cauldron, both of which are possible drops when you kill Kinisssch. All I get is a Naga Tail. The only other change was making the weaker enemies bloodless, which is irrelevant to my run. 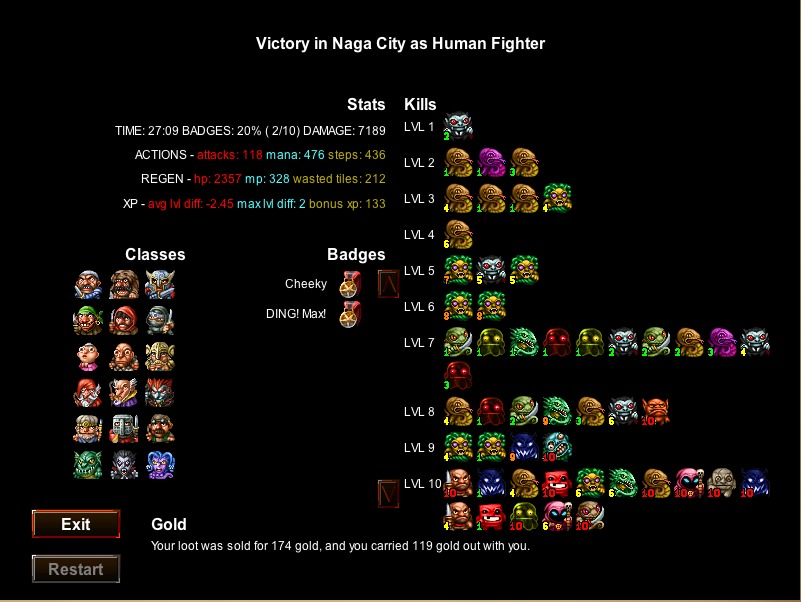 Here's my final screen. That's just incase you want to fill in the blanks of what I killed when and so forth. While it looked like I barely won, because I had no potions, I could have gone much longer. WIth my 100 Mystera piety I could have converted into Dracul or the Glowing Guardian for Bloodswells or Protections. Then once I ran out of piety, I could have used Consensus to get out one or two more.

Key Points: Worship Tiki Tooki in the clean up phase and get poison, then convert to Mystera for the arena. Use poison to kill all of the bosses without special strategies and follow directions for the ones that do. Convert to the Glowing Guardian or Dracul for extra hp and/or mana after you run out of potions.

One last note: If this is your first try in Naga City, try an easier class like the Warlord or Thief. The fighter is not actually a good pick for this dungeon.