In the second part of this collection we will look at Dragon Isles. With less blackspace than normal and one of the fattest groups of monsters, leveling up here is a challenge. On top of that, it has two of the highest hp bosses in the game! Still, no matter how daunting, every dungeon is beatable. We'll start off by looking at my preparations. 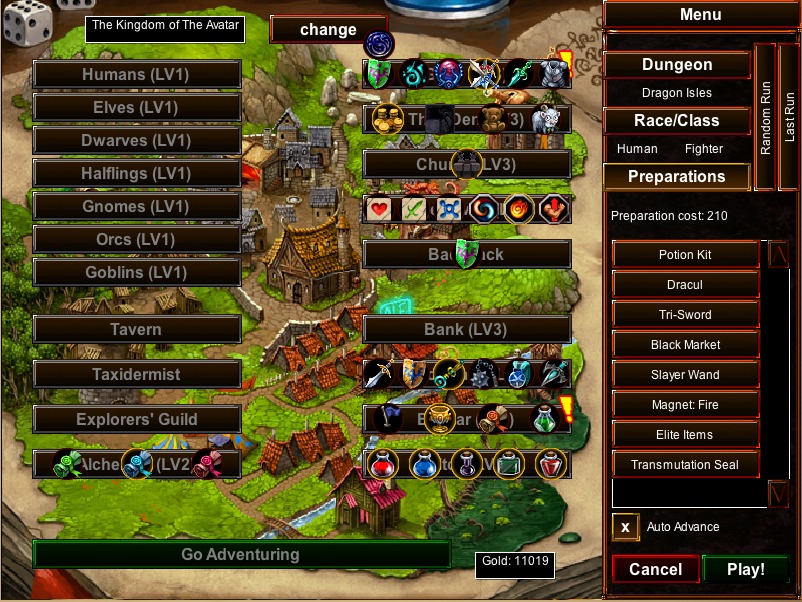 Tri-Sword: This is a wonderful all-round preparation, second only to the Dragon Shield, which just so happens to be the reward for beating this dungeon.
Black Market: This is more of a personal preference. Still, it helps because I'll be prepping elites.
Dracul: While normally I would select +1 altar and just scum for Dracul, I'll prepare him to avoid scummming.
Magnet: Fireball: This is essential for classes that need leverage early, and the fighter needs as fast as he can get it.
Slayer Wand: While this prep is usually mediocre, it is incredible for Dragon Isles.
Elite Items: I'm really hoping for Elven Boots, because most monsters and both bosses deal magic damage.
Potion Kit: Health and Mana Potions are always useful. Whupaz is essential for every vicious dungeon. Reflex is always helpful. Strength combos with the tri-sword to help get me off my feet.
Transmutation Seal: This is an okay prep normally, especially for nabbing a secret subdungeon, but if I don't find ENDISWAL, this will be essential. 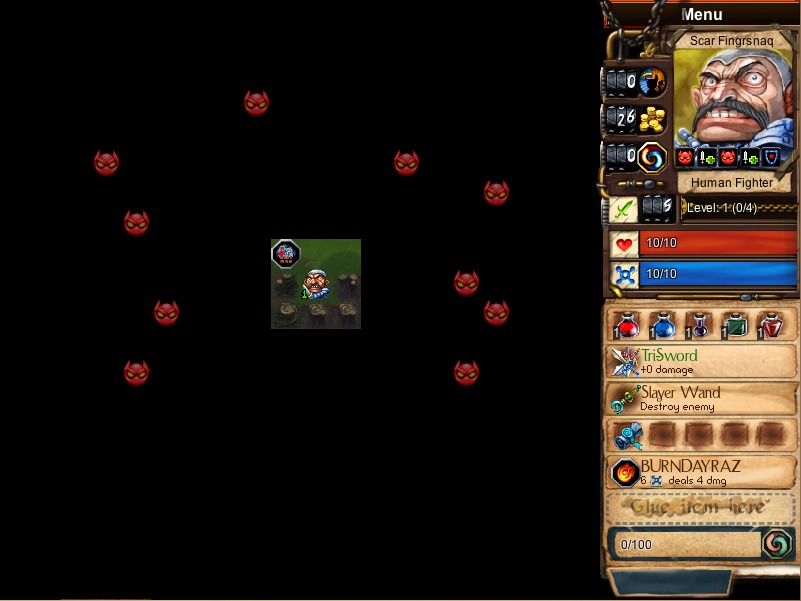 So much for not finding ENDISWALL. Oh well, I might as well use the seal for gold. 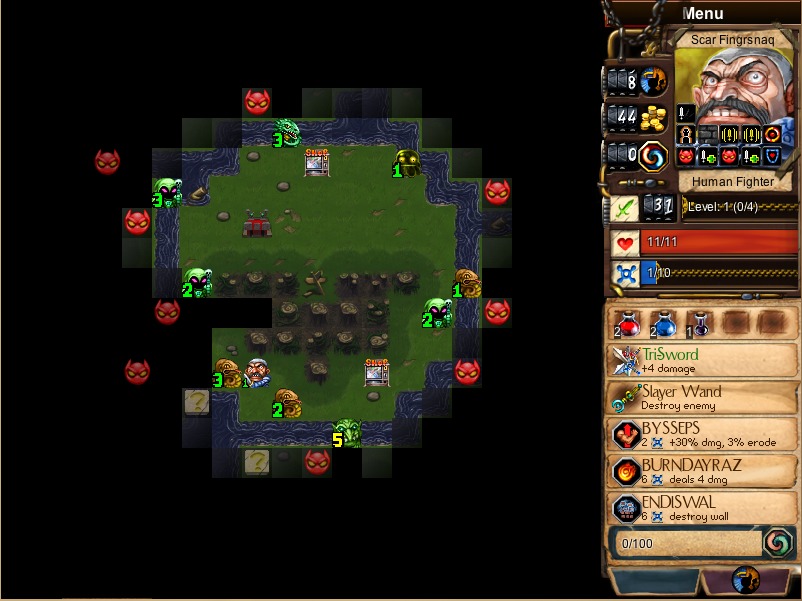 Time to start off right! I'll worship Dracul and then pick a target. This level 3 snake has 36 hp and does 16 damage. I can survive because I used ENDISWAL a little, which gives me stoneskin. As for the damage, I have used a strength potion and the BYSSEPS glyph. That left me a little short, so I used the reflex potion as well. Time to kill. 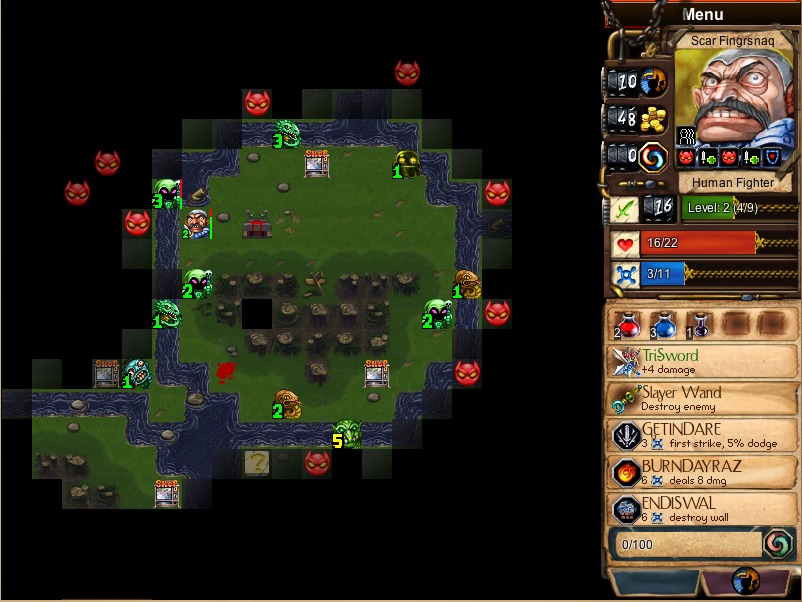 Time to reveal the one weak block in Dragon Isles wall of tough monsters: the druid. They have less than normal hp and damage, one death protection and magic damage. The great thing about death protection is you can get rid of it, fully regenerate and then go in for the kill. Using BURNDAYRAZ to help me regen fight, this guy is a piece of cake. Note that I converted BYSSEPS for GENTINDARE. 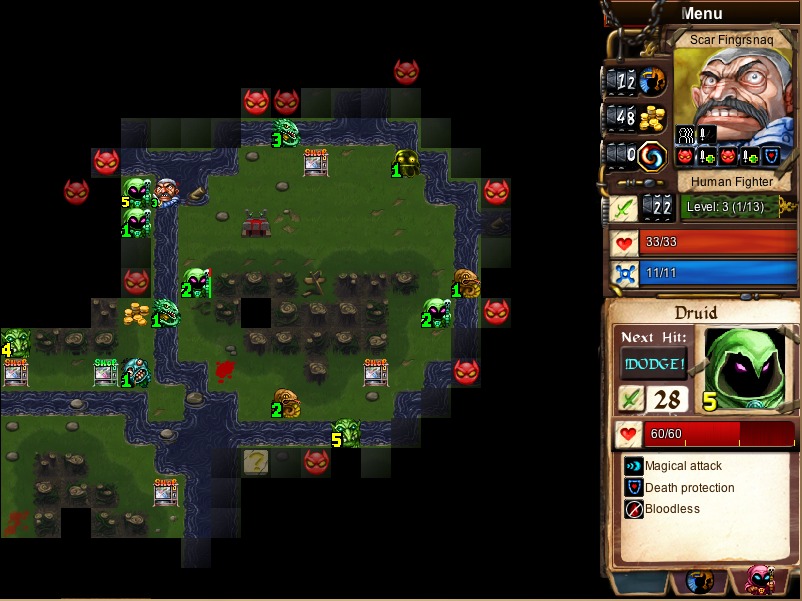 Time to take out this druid with the power of GETINDARE. GETINDARE is probably the most underrated glyph in the game. It can grant up to three extra shots against a monster. You can set up a dodge by attacking weak monsters so you can recast GETINDARE until the prediction says !DODGE!. If you're lucky or the fight is long, you can pull off another dodge if you cast GETINDARE mid-fight simply for the dodge chance. Lastly, you can use it for first strike on the finishing blow. 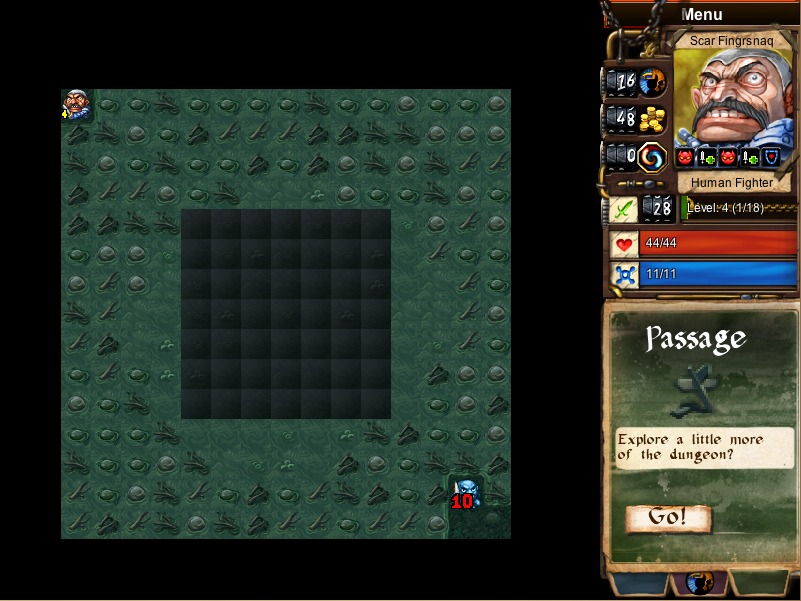 This is a very cool subdungeon. I'm glad I got it. 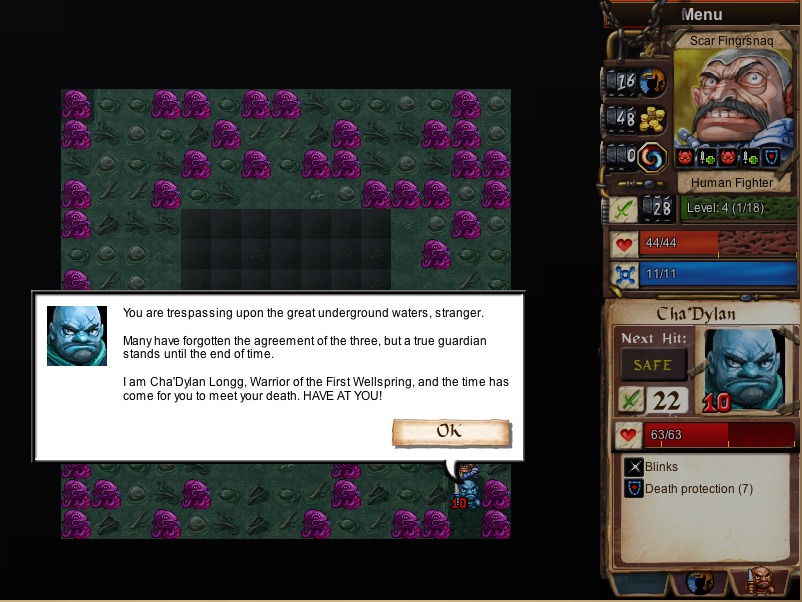 Oh no! He wants to kill me! I guess I'll have to kill him first. The snakes blink, are bloodless, do not grant exp, deal 10 damage and have so much exp you shouldn't waste time trying to kill them. The real tough part is that when you hit Cha'Dylan, everything blinks. Him and his snake friends. I won't attempt this combat yet. First, I need to be able to survive two hits from him. 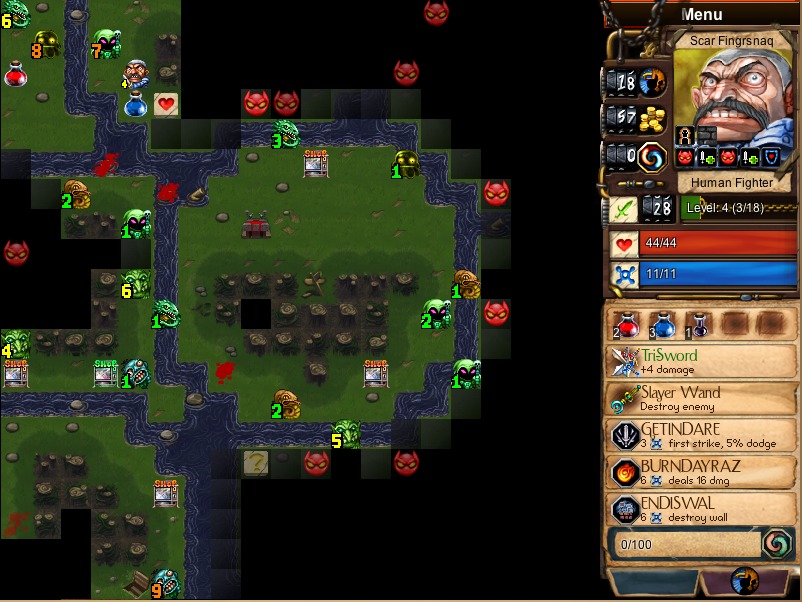 Perfect! A health booster is just what I needed. Time to kill that blinking jerk and get a ton of bonus exp! 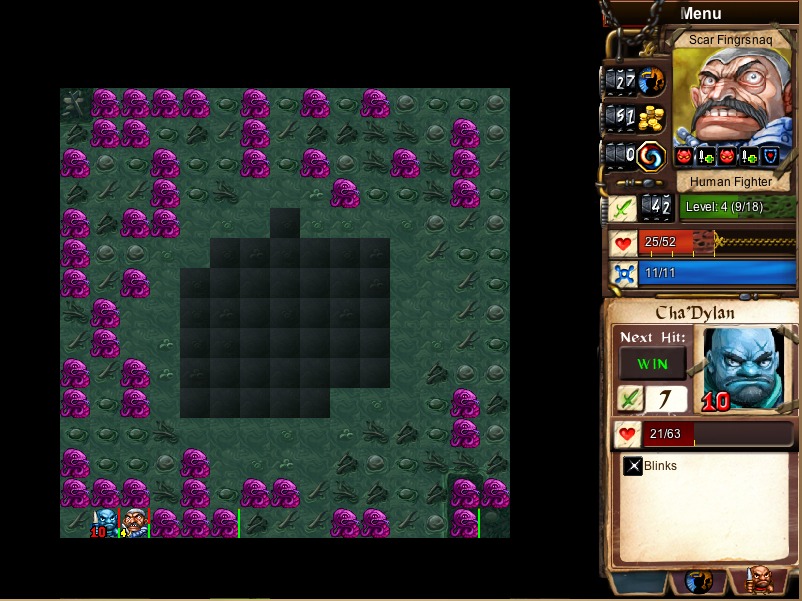 And he dies. When you kill him, all of the snakes disappear and he leaves a LEMISI glyph behind on his corpse. Unfortunately, this combat took a lot more tiles than I expected, due to bad luck with blinking snakes. I even had to use three mana potions. Still, losing three mana potions isn't huge in this dungeon, because they have very little use and fuel my tri-sword. 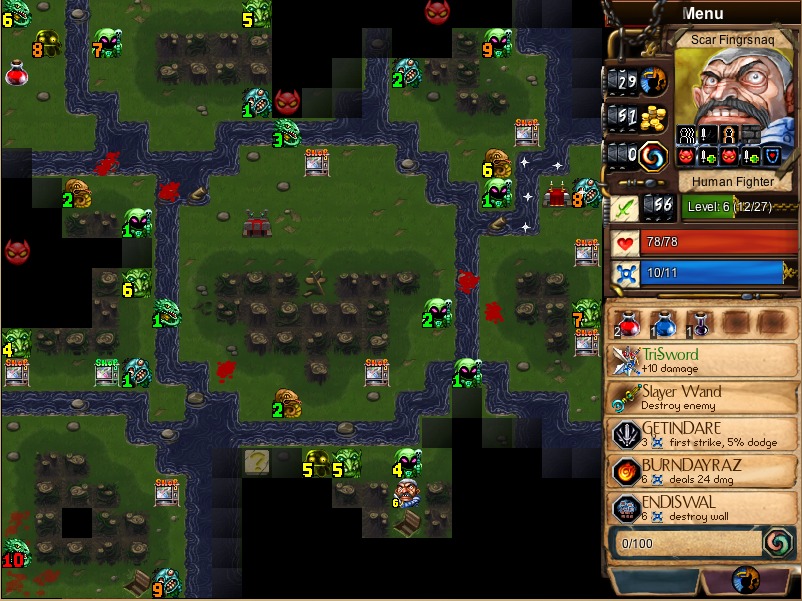 Now you see what I mean by too many tiles. My secret subdungeon is the one with 20 gold piles, but it doesn't end up mattering. Oh yeah, I forgot to take a shot of it, but I'm about to kill that level nine druid using the same tactics that I used on my previous level five one. 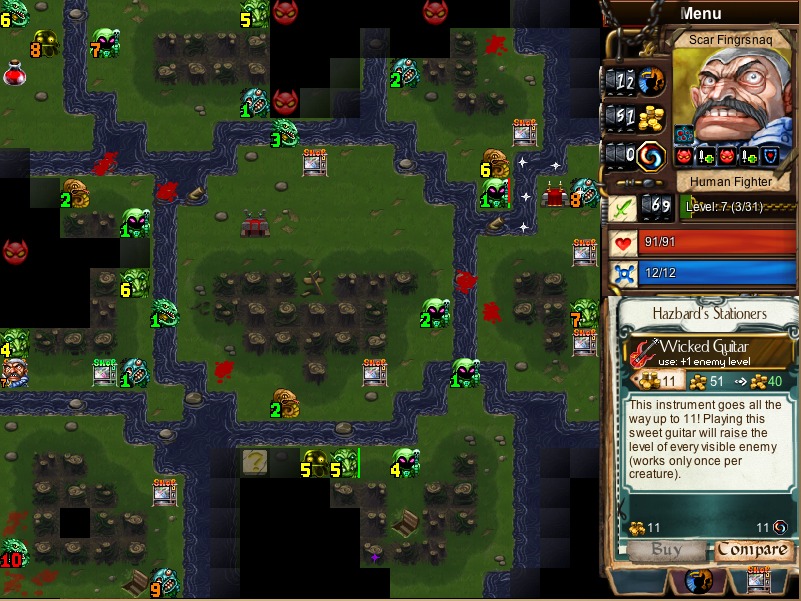 I was going to buy this Wicked Guitar, but I don't have enough space. In retrospect, I should have converted BURNDAYRAZ for it, as it would have been great for my fight against The Firstborn. I've also taken a level of Lifesteal. Now my popcorn is both an exp and a health resource. I really wished I had pumped it with the guitar.

Converting to Tiki Tooki now would be ideal if he had spawned. The quicksilver and reflex potions combo quite well with both the tri-sword and my lifesteal. 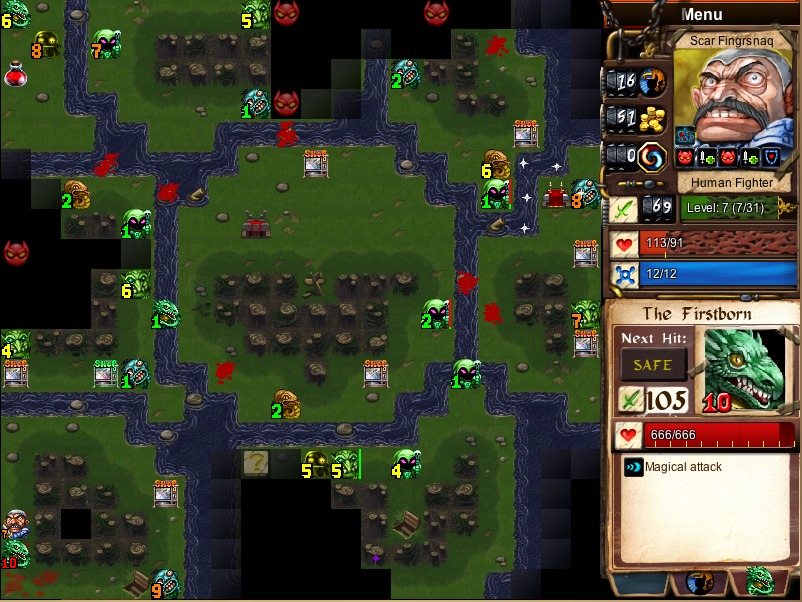 Now I have to kill The Firstborn. This boss is harder than the final boss of this dungeon, so whupaz him. The tough thing about my current situation is that I don't have enough max hp to survive a hit. 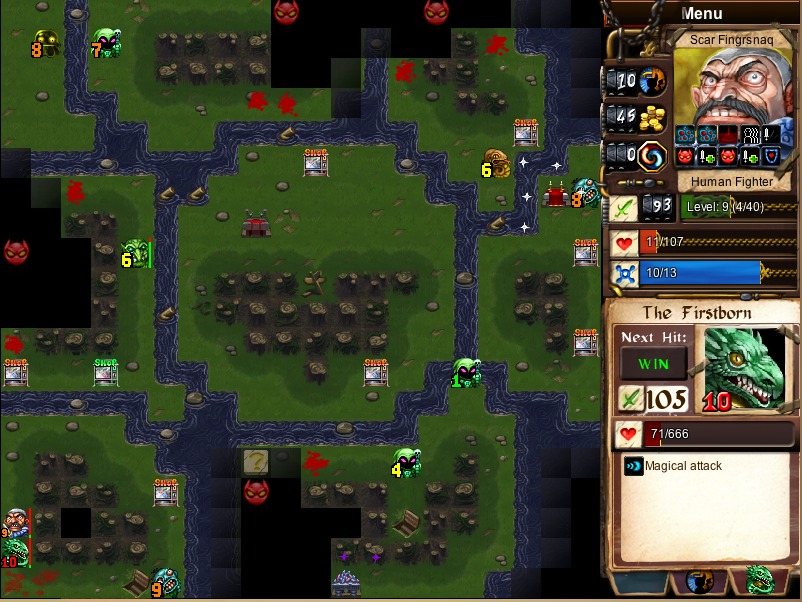 To kill him I've taken 2 blood tithes, killed most of my popcorn, drunk most of my blood and used my last mana potion. I even bloodswelled once. Well, the cavern is open. I must descend. 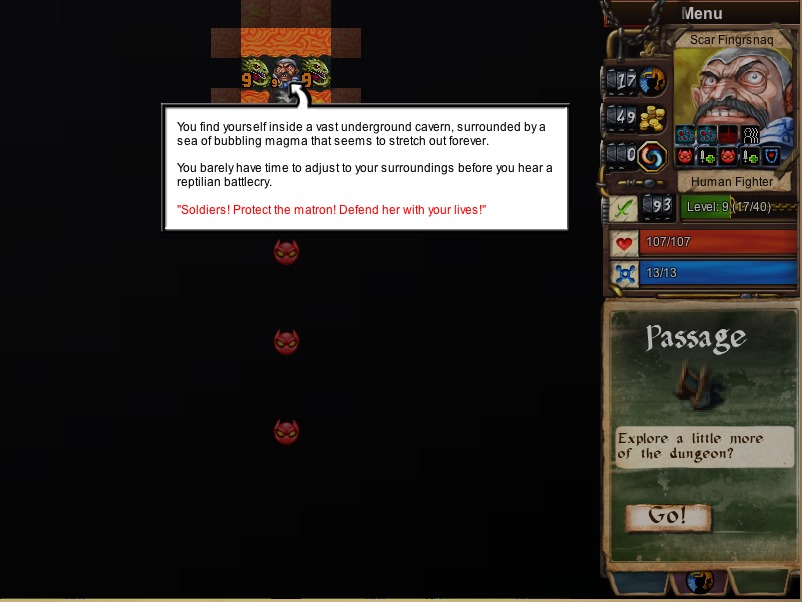 Uh oh! This is why I have ENDISWAL. These dragon guards are some of the most annoying monsters in the game, and ENDISWAL lets me bypass two of them. I use it and convert it. 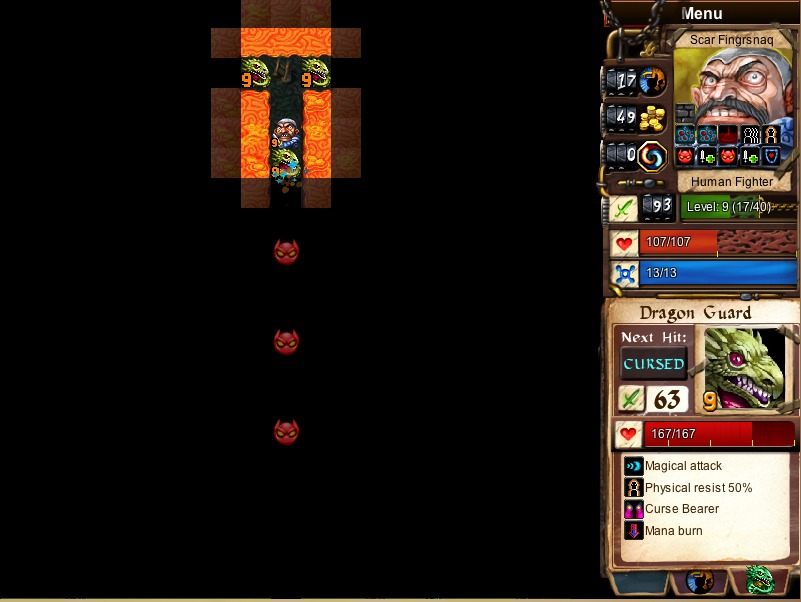 More guards. Well, now you know why I've been lugging around a slayer wand. You do not want to fight these guys. 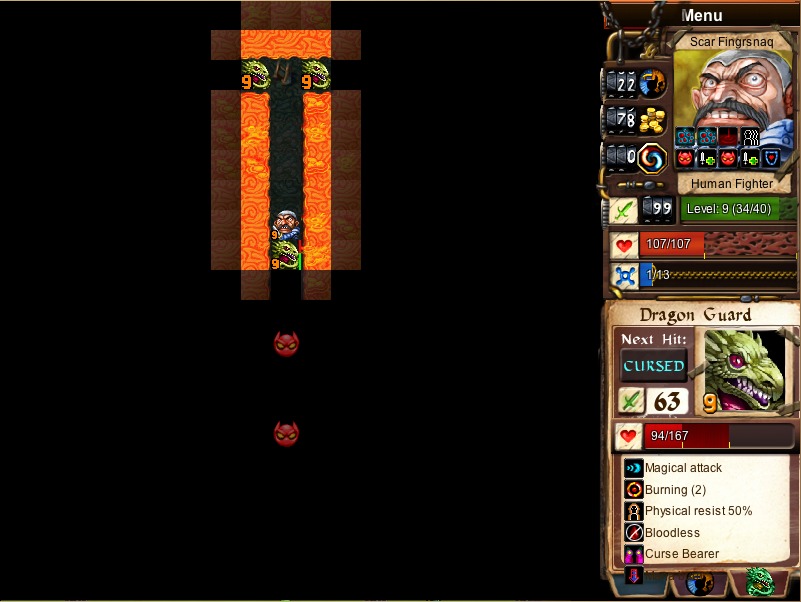 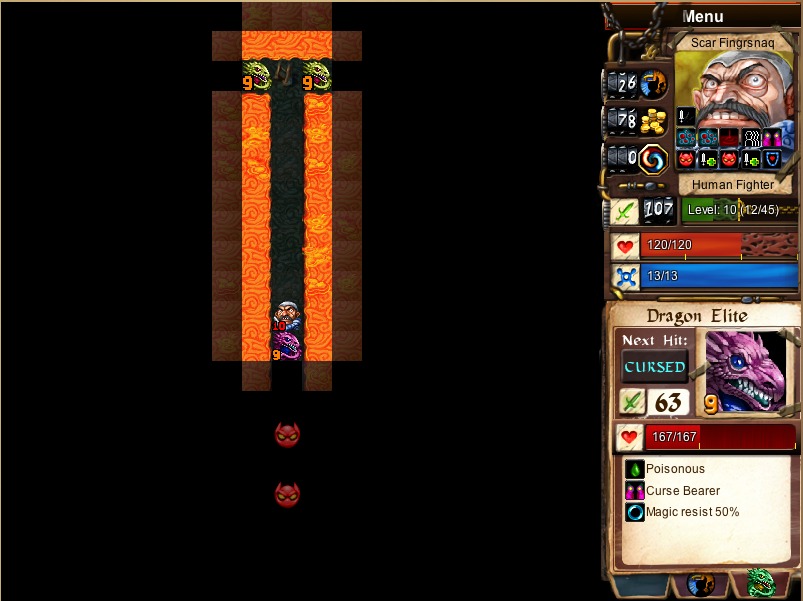 Here are the elites. These guys are a joke to me. If I attack and then first strike, I will end up with more hp than I started with, because lifesteal is twice as effective against lower level monsters. I'll kill both and then... 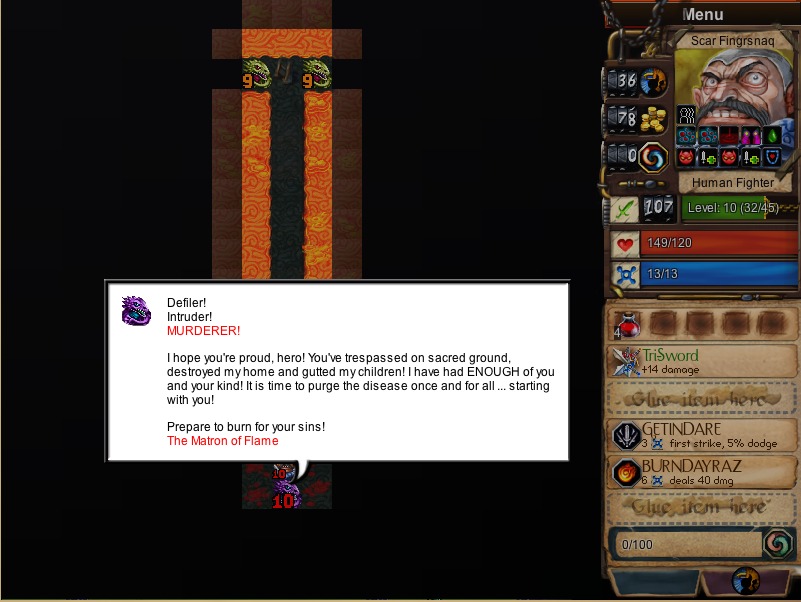 Be scolded by the mother of all dragons. If you can call that a scolding. Whatever. 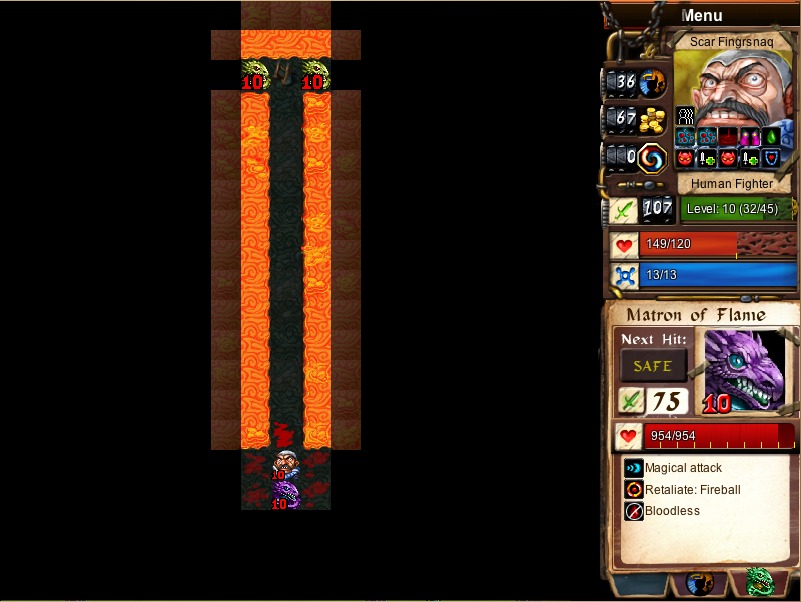 She's weaker than The Firstborn for melee characters. The punishment for preparing Dracul is that 25% of the monsters are bloodless. That means two things: Lifesteal is not effective and they do not drop a blood pool. Unfortunately, my life steal is useless against the matron. In the meantime, I bought that guitar to prepare for the fight. It's a shame my elven boots never showed up. I've also cleared away all of my stacks of curse.

Here's why you need to watch the guards and elites. They all are curse bearers. 90% of reliable strategies here need resistances, not even mentioning they make the Matron a joke, and curse removes them. You also usually don't have much popcorn by the time you get to the guards and elites, so it may become impossible to remove all of your curse stacks. That's why I put so much stress on ENDISWAL and the slayer wand. 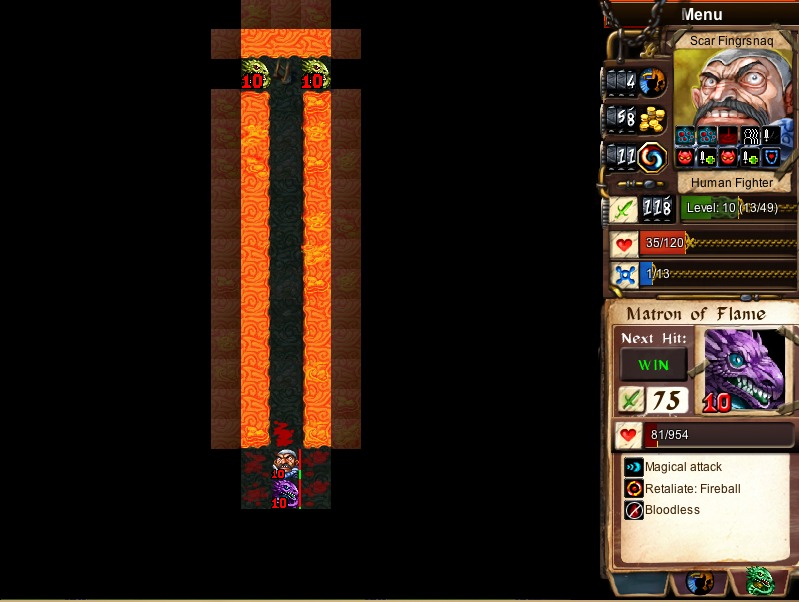 Using my resources, I can easily defeat her. My remaining blood pools and potions could even have kept me going a little longer. We have beaten the dragons. If you want to see the story screens, win it yourself. 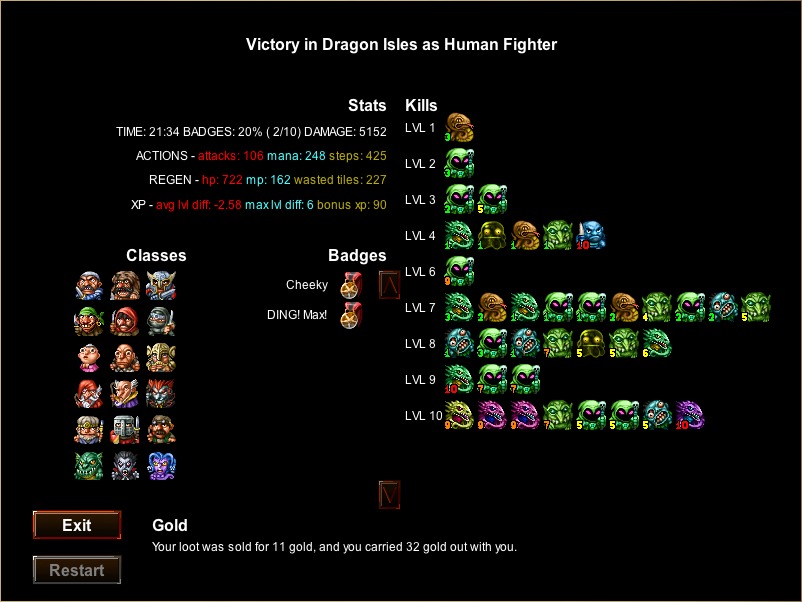 Here's my final screen. That's just incase you want to fill in the blanks of what I killed when and so forth. Just to drive home the point of how beatable vicious is, I made quite a few mistakes as a human fighter and I still won.

Key points: Whupaz the Firstborn, not the Matron. Get ENDISWAL or a translocation seal for the wall below, and then a slayer wand for the first dragon guard in your way. Avoid curse as much as possible and get magic resistance as much as possible. Dracul and The Glowing Guardian are the best god choices, although you should use Taurog for berserkers. KILL DRUIDS TO LEVEL.

One last note: If this is your first try in Dragon Isles, try an easier class like the Berserker, Thief or maybe even Priests for the extra hp. The fighter is not actually a good pick for this dungeon.