In the fourth part of this collection we will look at Demonic Library. There are six different bosses at least one status affect that will hurt you and they all deal considerable damage. On top of that they give each other death protection and there's a fairly dangerous monster set. Still, no matter how daunting, every dungeon is beatable. We'll start off by looking at my preparations. 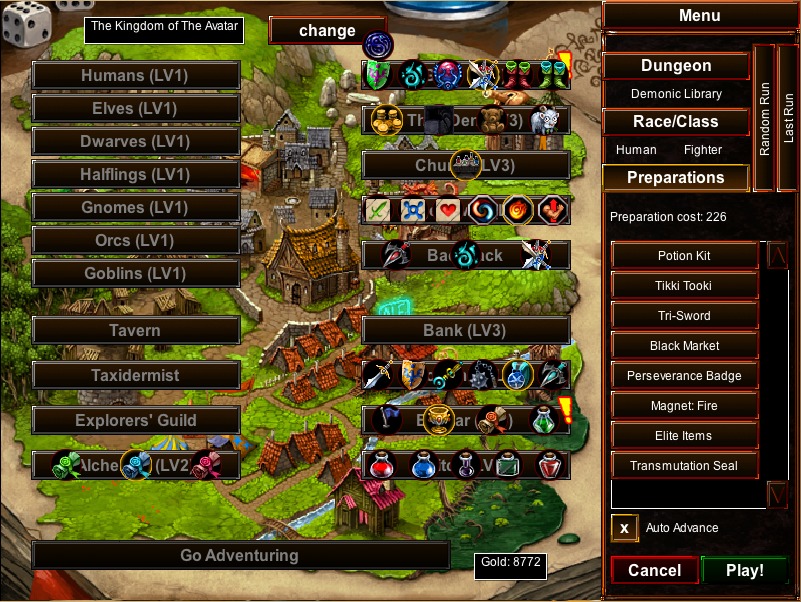 Tri-Sword: This is a wonderful all-round preparation, second only to the Dragon Shield.
Black Market: This is more of a personal preference. Still, it helps because I'll be prepping elites.
Tiki Tooki: This is basically the center of strategy. You'll see why later.
Magnet: Fireball: This is essential for classes that need leverage early, and the fighter needs as fast as he can get it.
Perseverance Badge: A great prep that gives more damage and takes up little room.
Elite Items: I'm really hoping for Elven Boots, because a lot of the bosses do magic damage and the extra mana helps with the low hp bosses.
Potion Kit: Health and Mana Potions are always useful. Whupaz is essential for every vicious dungeon. Reflex is always helpful. Strength combos with the tri-sword to help get me off my feet.
Transmutation Seal: I have no need for the other seals, and it's always nice to nab the secret subdungeon. 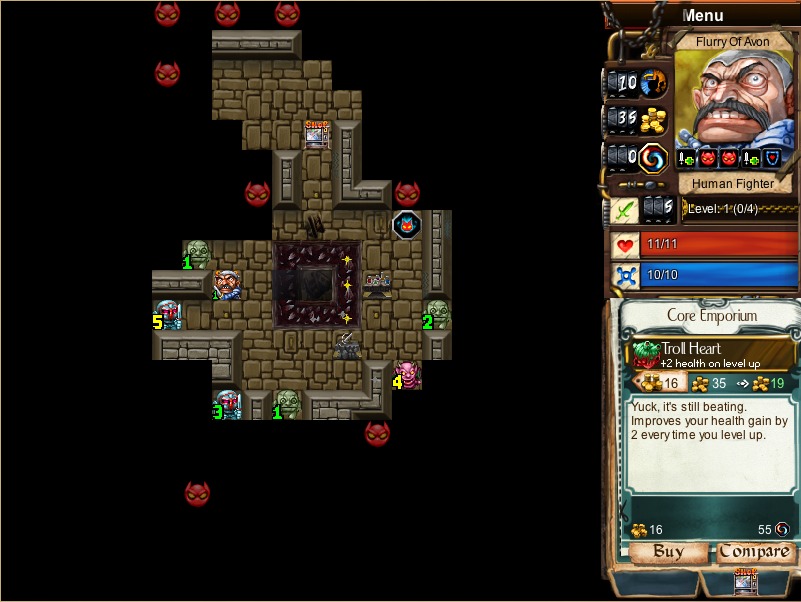 Due to the high-damage demonlord bosses, this troll heart will be useful. The other shop has the elven boots, which I'll buy once I can afford it. 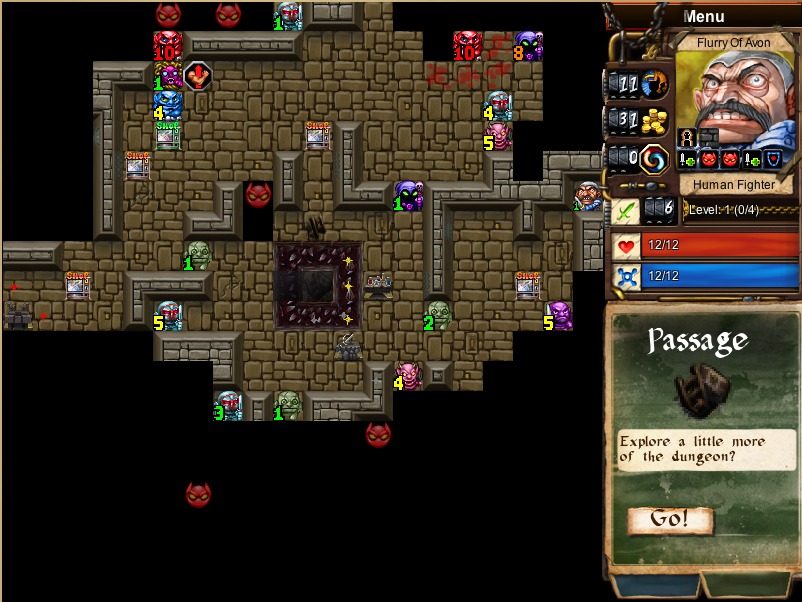 I can't find a good level three target, but this secret subdungeon is Good Glenrick. It is a level six monster with 10 hp and 6 damage. It's the ultimate early level catapult. Oh yeah, I converted WONFYT. 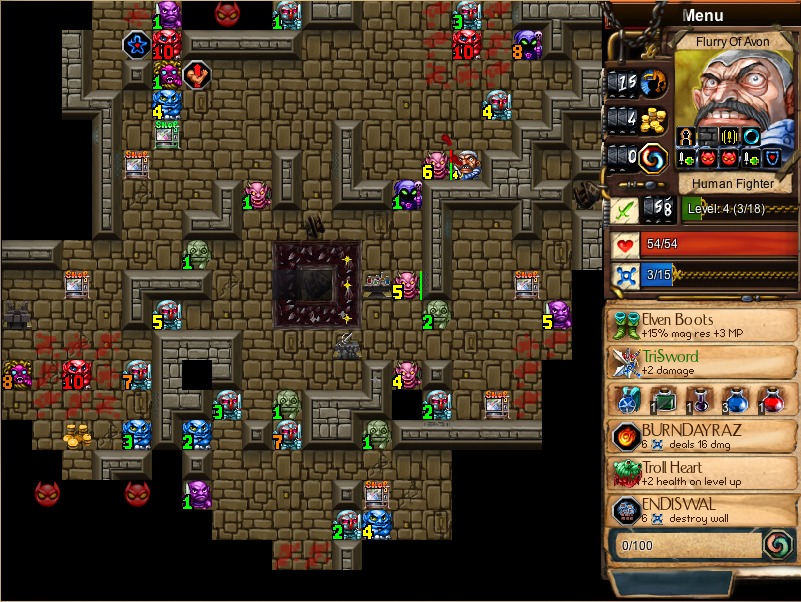 Level one to level four! I'm about to kill this level 6 imp with ENDISWAL and a strength potion, and then the level five imp with my DP. I can easily replenish that with CYDSTEPP. 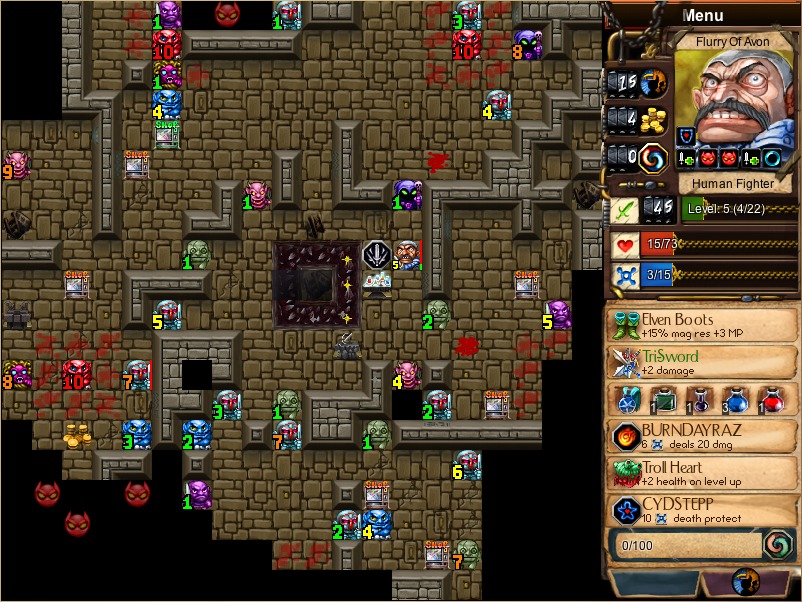 This may seem a bit early, but I'm going to start worshipping Tiki Tooki. I'll start cleaning up popcorn till I can afford the poison boon, then 20 more. Also, I remembered to convert BYCEPS. The subdungeon just has some gold and a sign. 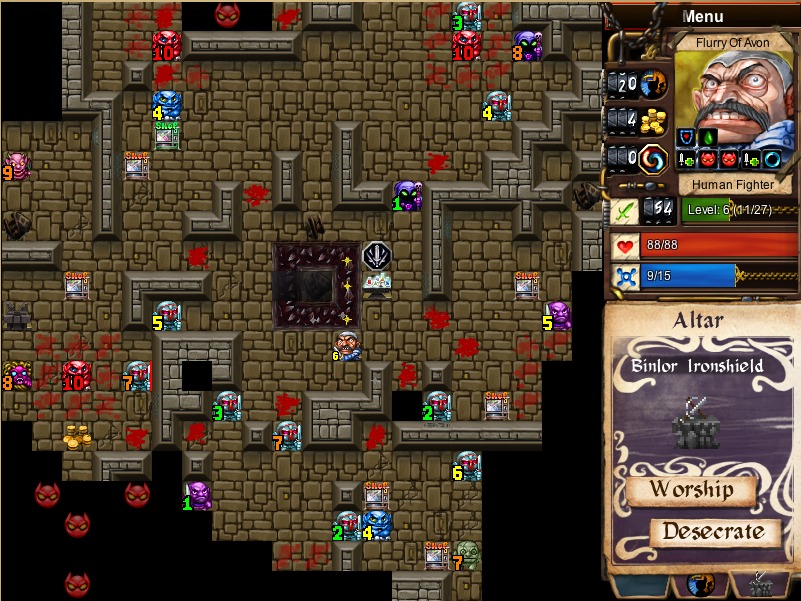 I'll desecrate Binlor, convert to Dracul, convert CYDSTEPP and pick up GETINDARE. I may lose my 15% magic resistance, but the benefits that I will reap instead are enormous in comparison. 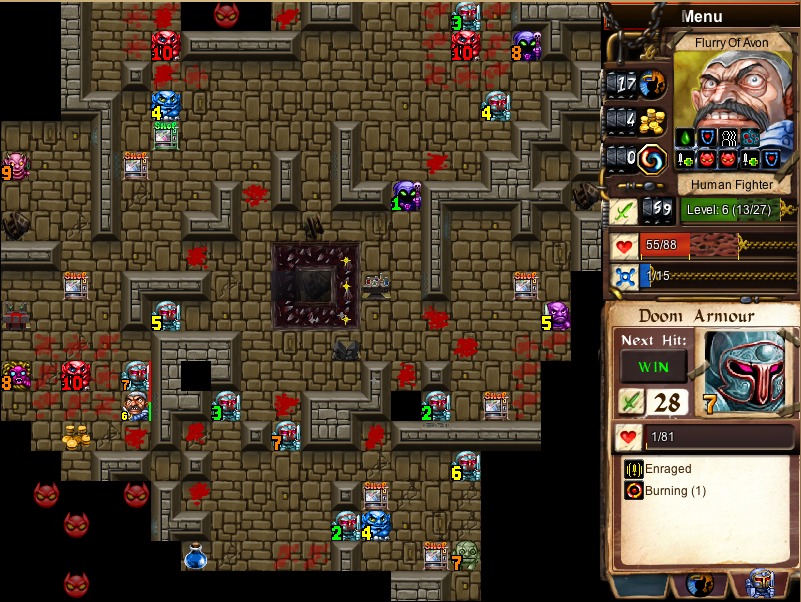 This fight was probably a waste of resources, but it demonstrates the power of poison. I just attack, regen, and repeat. 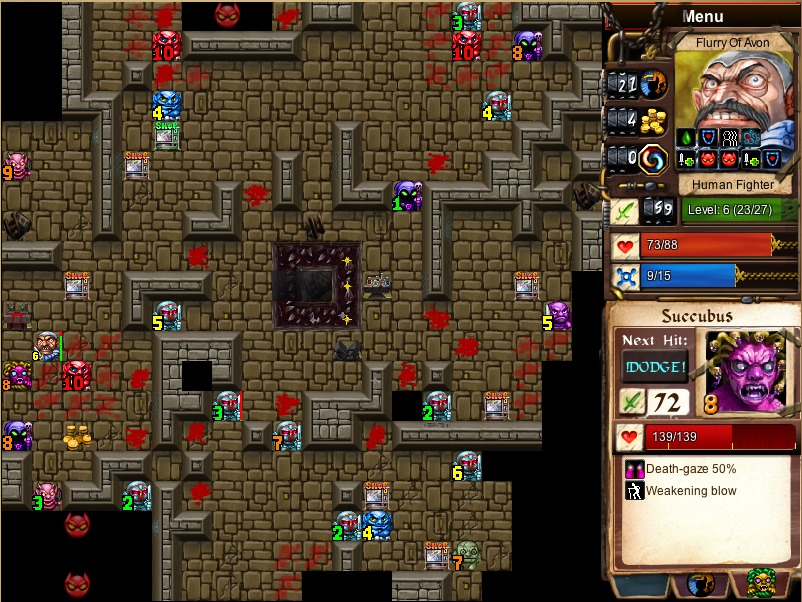 I'd like to demonstrate the power of GETINDARE. This Succubus is two levels higher than me. I set up a dodge by casting GETINDARE repeatedly while taking death protection off weak doom armors. That way I can clean up doom armors for popcorn later.

To kill the succubus I just dodge, fireball and first strike.

I grabbed a stack of lifesteal. 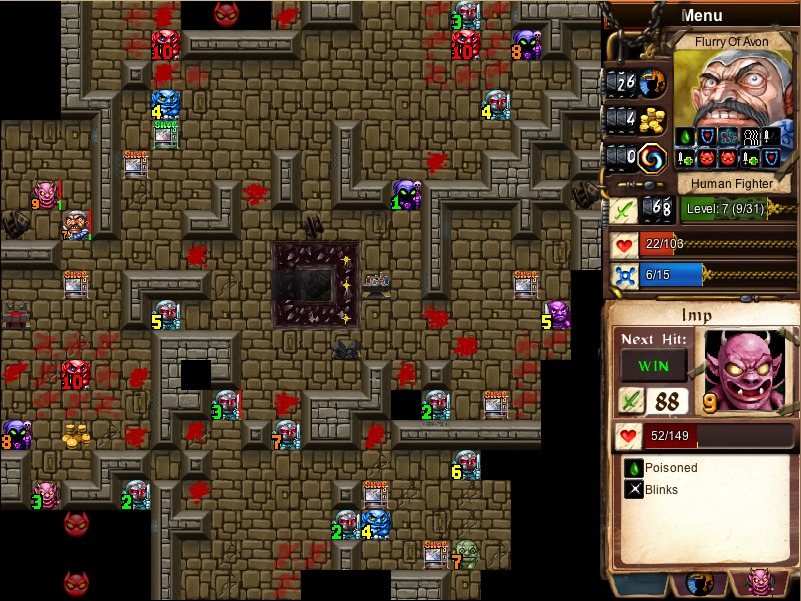 I'll I have to do to get high level kills is use poison. It's an incredible power-leveling tool. 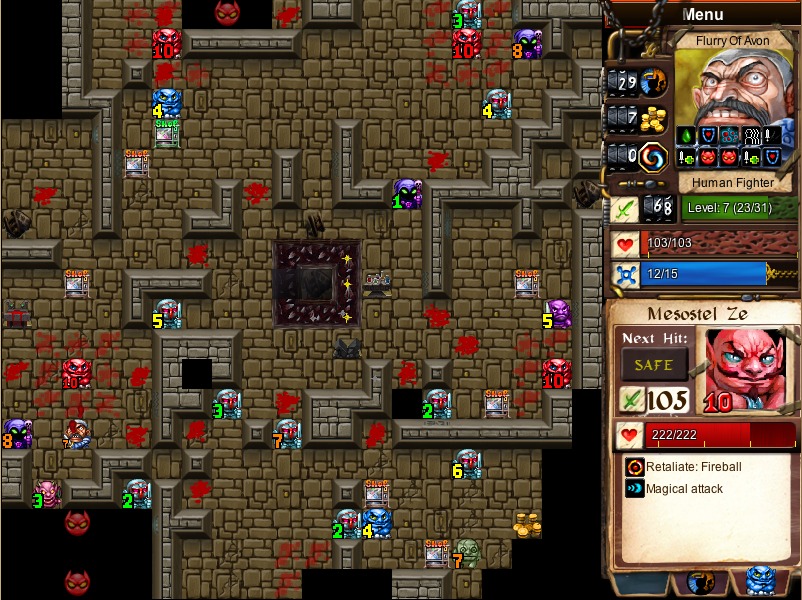 Since this guy is the hardest of the five demonlords, I'll take him out first. The reason for this is that when you kill a demonlord it gives another demonlord a death protection. If you save the worst for last, it will have two or three death protections. Since I can't use fireball, I'll cast GETINDARE before every attack. Hopefully I'll get lucky enough to get a dodge in the middle of the fight. Also, while I normally couldn't survive a hit from him, GETINDARE combined with my lifesteal reduces his damage by seven. 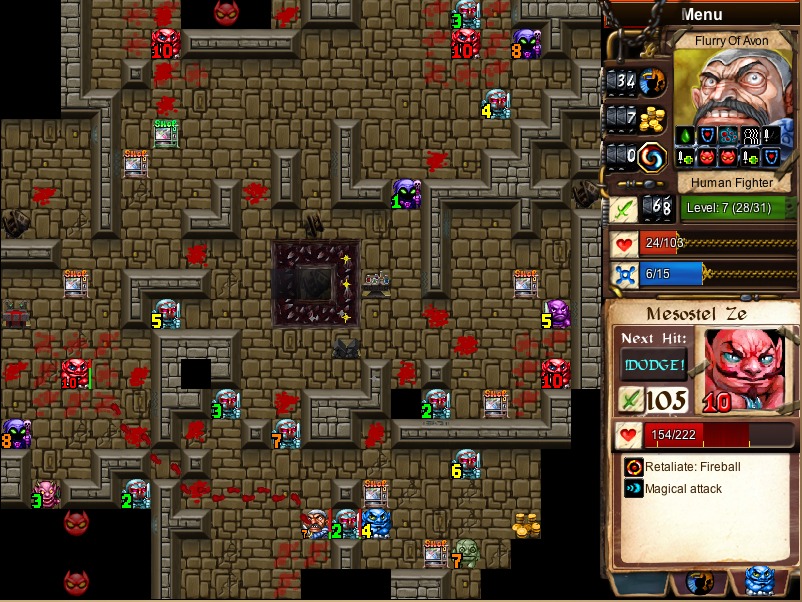 I attacked this doom armor to see if I can get a dodge, which I did. Now I'll attack the demonlord, poisoning him, regenerate to full stats and finish him off. That gave Perivolcan Ze a death protection. 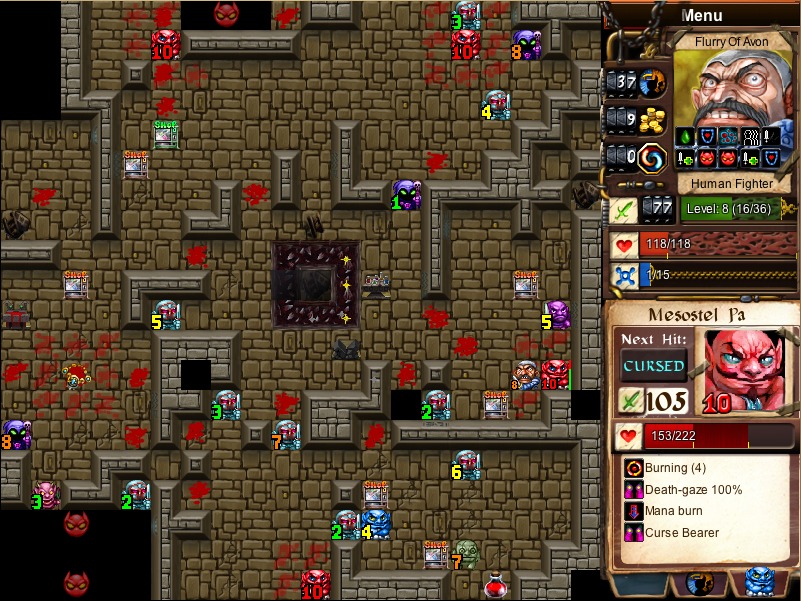 Here's my next target. I had a dodge, so I figured I'd attack Mesostel Pa. I dodge, attack, throw down a mana potion, and win with first strike. That gave Perivolcan Ze another death protection 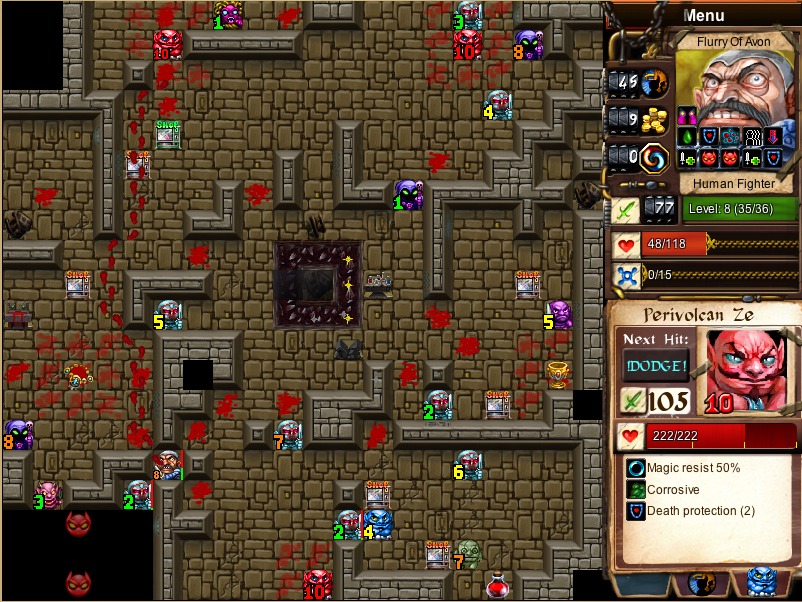 I have a dodge and I'm about to level up, fully healing me, so I'll start hitting him. That way I get an extra hit. To take out his death protections I fireball the first one, discharge the burning dealing one damage and taking out a second death protection and then GETINDARE for the kill. That gave Aphelion a death protection. 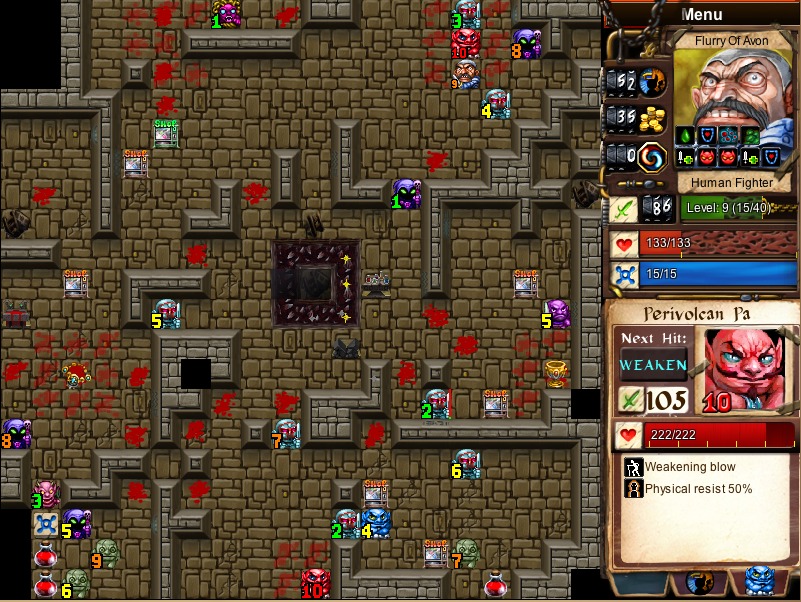 I'll take out this guy next. I just fireball twice, attack, regenerate, and repeat. That gave Aphelion another death protection. 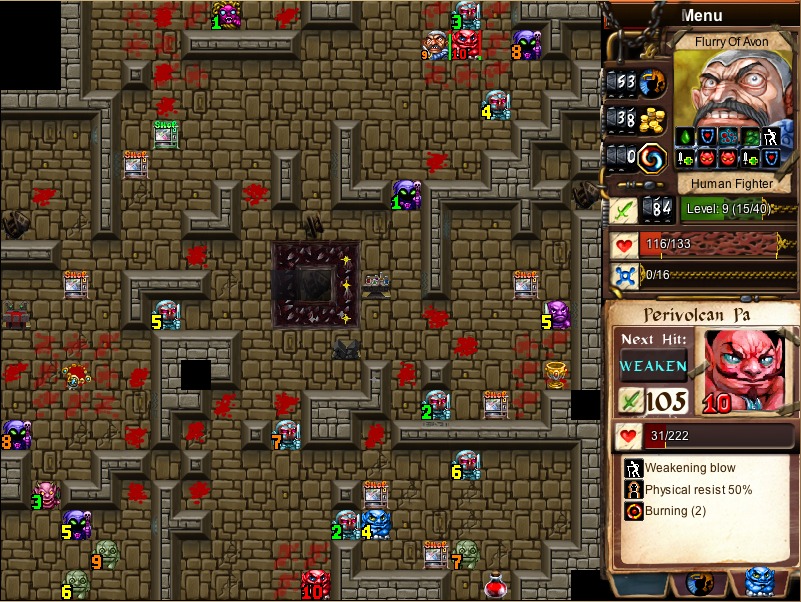 This guy weakened me a bit so I'll buy a fortitude tonic, but I forget it until later. 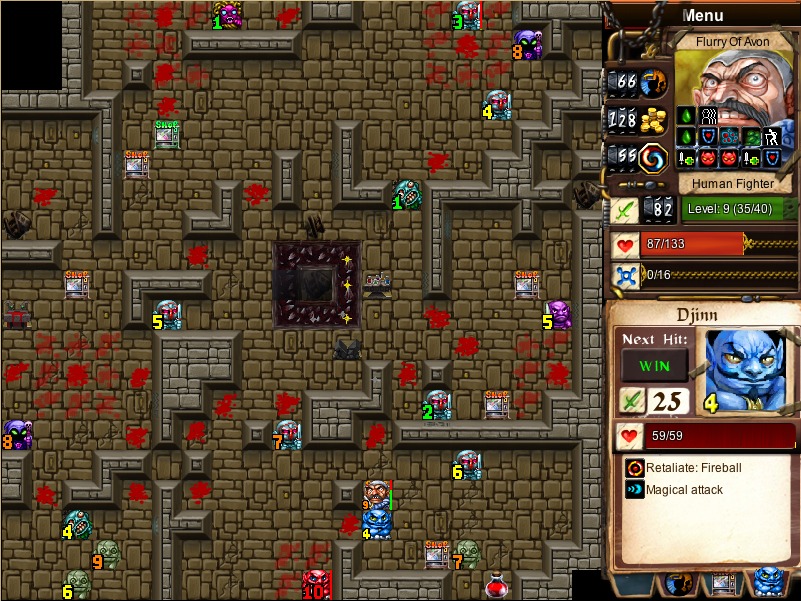 I started fighting Aphelion. He has magic attack, poisonous, first strike and two death protections. I can't regen-fight this guy, because Aphelion poisons me too. I dodged, fireballed, dodged again, burnt out a death protection, used burning to take out his other death protection. Now I'll kill this djinn to level up. Then I fireball him so I kill him without poisoning me. Then I buy a fortitude tonic and cure my weakening. 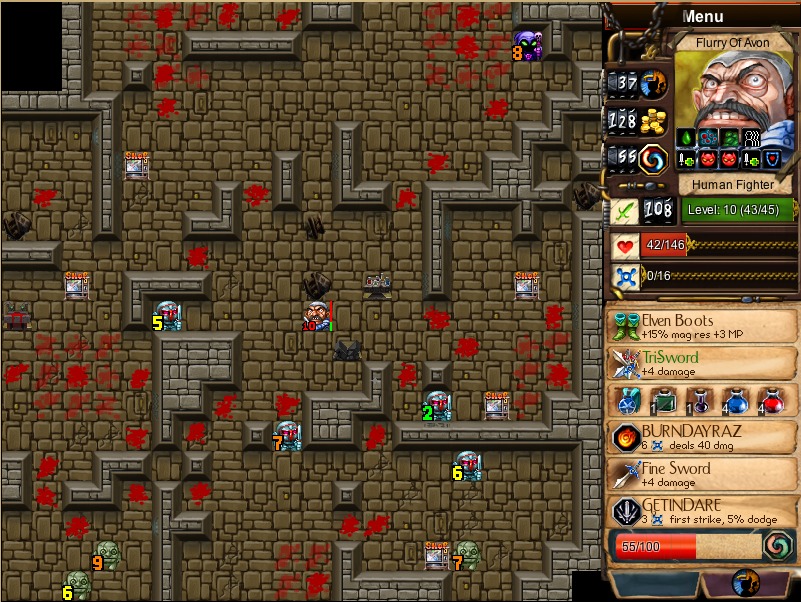 Now that I've killed the five demonlords they have reawakened THE AVATAR. I cleaned up the map so I am about to level up mid-fight with against The Avatar. Then I convert my troll heart to buy a fine sword. Lastly, I pick up another level of lifesteal to health with the boss. 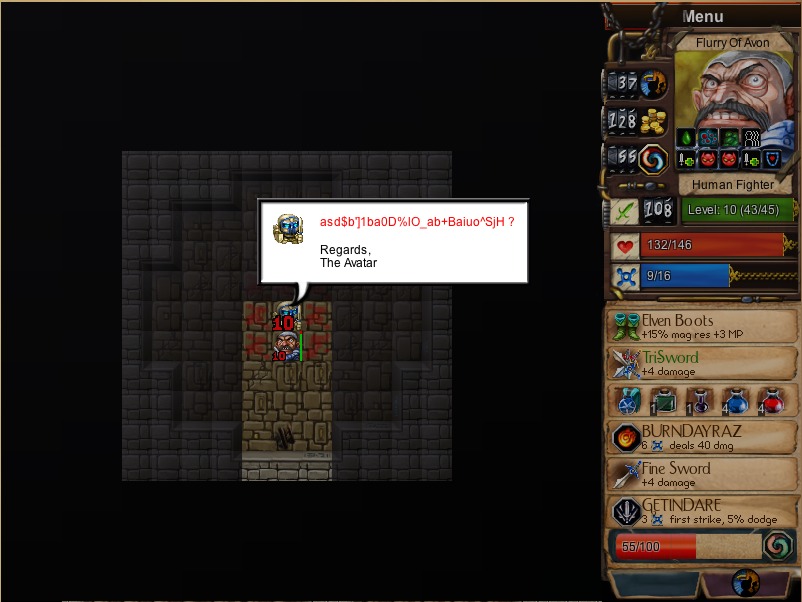 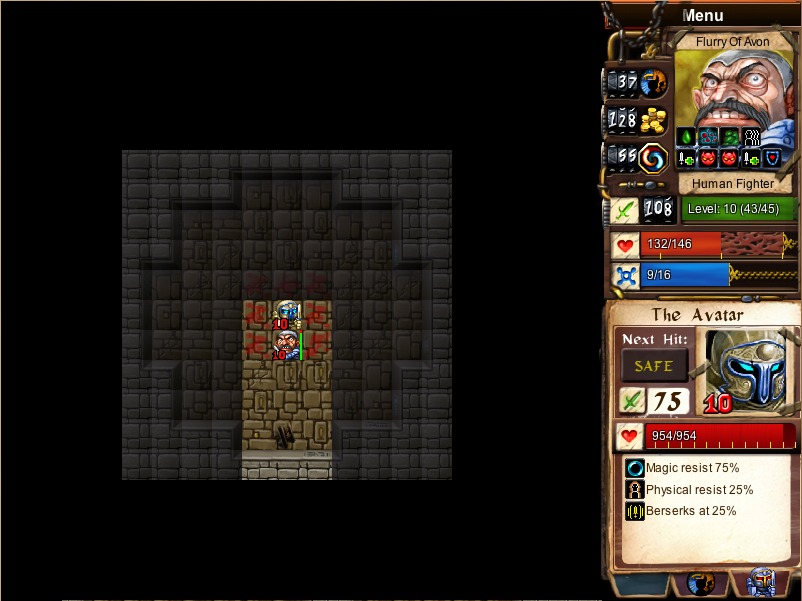 Here's his stats. He's not actually that strong, but most people have their resources too depleted because of the demonlords. He also spawns level ten monsters with random stats and abilities whenever you hit him. I just whupaz, reflex, use poison, use a mid-fight level up and... 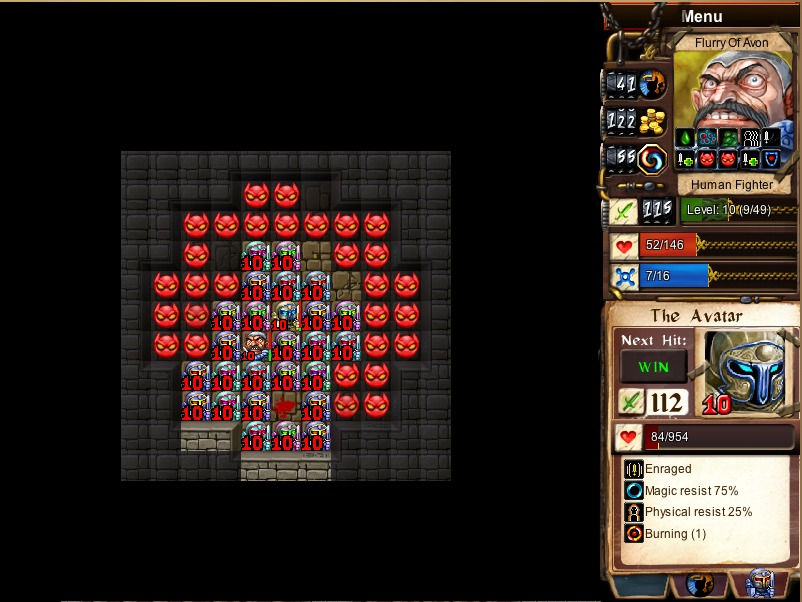 I crush him. Not even a potion or a bloodswell or a bloodpool. He's really not that hard. 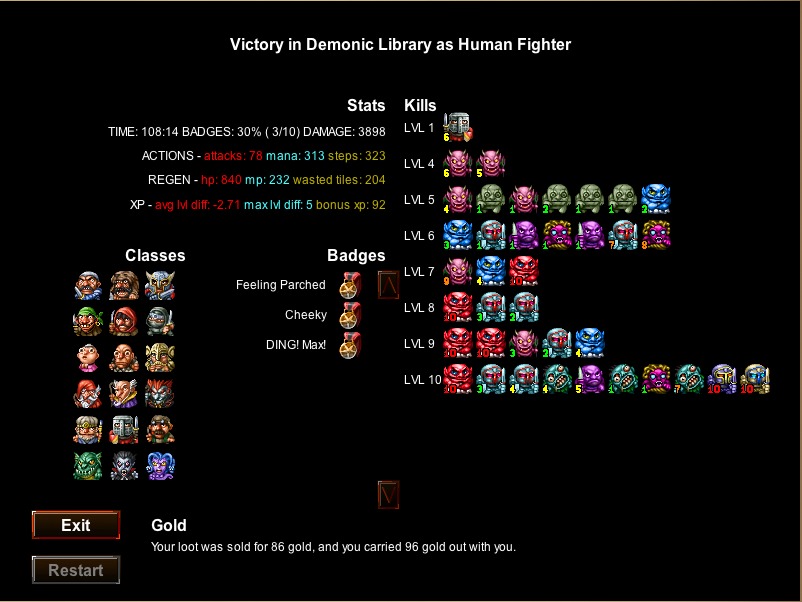 Here's my final screen. That's just incase you want to fill in the blanks of what I killed when and so forth. Just to drive home the point of how beatable vicious is, I made quite a few mistakes as a human fighter and I still won with tons of resources to spare.

Key points: Level up ASAP. Tiki Tooki and poison ASAP for leveling and convert out (preferably to Dracul or Glowing Guardian). Take out the tough demonlords first through poison and dodges.

One last note: If this is your first try in Demonic Library, try an easier class like the Warlord, Rogue or Thief. The fighter is not actually a good pick for this dungeon.