Difference between revisions of "Damp Darkness" 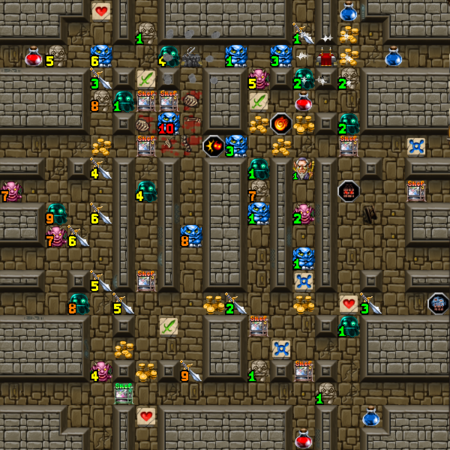 Sorcerer silver challenge. It is set in a Halls of Steel layout map with the Northern city tileset.

BURNDAYRAZ is to be avoided given his

WONAFYT) at the end of a longer wall, or just next to another monster.

Depending on your altars you may choose a different approach. If you take the

Glowing Guardian, you can optionally benefit from

Humility, and maybe a

Protection or two, however you will most likely want to convert out towards the end of the boss fight latest, to allow you to drink the

Mana Potions of your

Gnome Sorcerer. You can take

Binlor Ironshield at the start, build up piety and then convert over to

Chaos Avatar, and have a chance at a second with

Last Chance). Any two of these gods can give you a bit of Magic Resistance as well as Mana (and Health) restoration.

Slaying Wand, this gives you a shot at killing a high-level

Dancing Blade just before the boss fight, possibly bringing you to within arm's reach of leveling up.

If you're willing to scum a bit, early Binlor worship makes this dungeon very easy. Prep

Bear Mace and Extra Mana (you won't be needing

Orc as your race. Once you find Binlor, just blow up walls and start ratcheting your

Imps, then get the boss in position to kill around level six. With 28% MR and all three health boosters, you will be able to tank a hit from the boss. Just hit him through walls, get a midfight level up, and you should have him dead pretty easily. It's easily possible to execute this strategy

Feeling Parched with a

This has worked at least one time. I took a

WEYTWUT to position the boss at one end of a very long wall. Took one shot each of Boost Health and Boost Mana. Ran out of blackspace at LV5 and fireballed him a couple times, since my health was too low to hit him. Mid-fight leveled to 6 and fireballed a couple more times. Took

Chaos Avatar to get to LV7, hit him once, and used