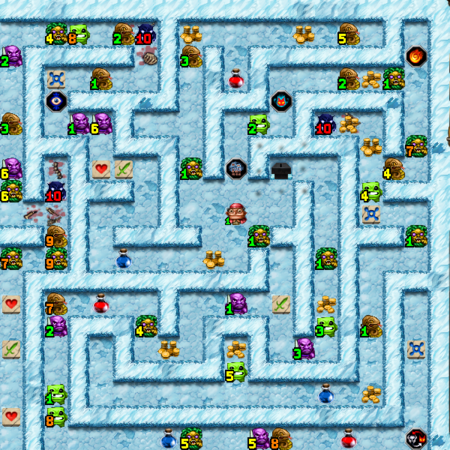 The Triad dungeon is the

The dungeon will always have the

ENDISWAL and the normally fixed

BURNDAYRAZ glyphs, and has no shops. There are no subdungeons. There is one Altar to

Of note is that this dungeon does not seem to have a chance to spawn CYDSTEPP.

There are three identical bosses in this dungeon, all three of which must be defeated to win:

The difficulty in killing each of the bosses is in surviving the retaliation hit. Even with the maximum 65% resistances granted by 4+ layers of Stone Skin, 159 Health is needed for this, which would normally only be possible for a Level 10 Priest (with all three health boosters). Hence the

Dwarf Priest, who can reasonable achieve this amount of Health by Level 8 (or even earlier, given the right boons). In any case, using the Pactmaker correctly will be essential to winning this challenge.

You have a choice between two Pacts that are really good for this dungeon. Taking the Warrior's Pact early means you can reach the health needed to survive a hit from the bosses earlier (if playing as a Dwarf, as low as level 7). Then it's only a matter of regenerating via spare blackspace, or quaffing a Health Potion, between bosses. This approach allows for the quickest victory. Be careful with this approach if not playing as a Dwarf, because you will still need to reach a high level and/or kill most of the monsters for this set-up to work.

A second option, which is actually better if playing as another race (like

Goblin), is to take the Scholar's Pact. This requires a bit of timing, because it's best to take this boon around level 6 (actually, whenever your next level would bring your health to 106 or more, the 50% overheal will give you just enough health). The downside of this is that you need to level up between boss fights, so in the end you still need to kill most of the monsters in the dungeon.

In any case, take Consensus before taking the boon you want. Your Stone Sigil will give you a bit of Piety, but it's better to start at 50, especially since you will be spending more than gaining.