Difference between revisions of "Toe-to-Toe" 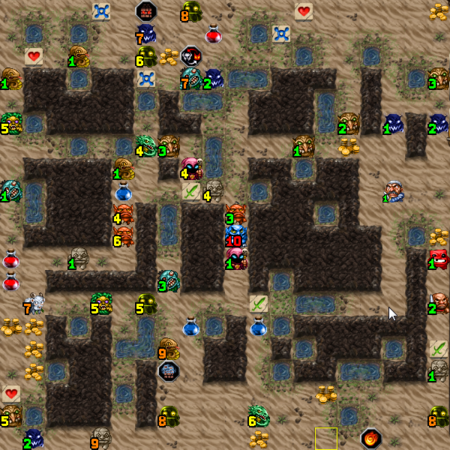 The Toe to Toe dungeon is the

A particularly troublesome djinn thinks it's being smart by harassing our northern caravans with illusion magic and wild beasts. Mere guards cannot hope to defend against this: this matter needs someone made of sterner stuff.
Monsters: All unlocked monsters and Desert Trolls
Boss: Imadjinnius
Recommended Preparations: Perseverance Badge Recommended Race(s): Dwarf or Orc

No shops, altars, or subdungeons appear in this challenge.

This challenge is basically Northern Desert with a different boss. Unfortunately the boss has

Retaliate: Fireball so you are going to have to take every one of his 125 damage shots. Level up as much as possible, preferably to level 10. That's 180 hp as dwarf or 130 as an orc, enough to survive a 125-damage hit. Though potions, your

Death Protection, a dodge (if you get lucky), and first strike (if

GETINDARE or Template:S:WEYTWUT spawn). Beating this challenge will give you

Retaliate: Fireball deals only half damage, you can get some hits in on the boss even without having 125 HP, and therefore without yet being level 10. If you're not playing a Dwarf, a good idea is to use

BURNDAYRAZ on the boss at level 8, level up with popcorn, use

BURNDAYRAZ again, and level up with popcorn again before finishing the fight with physical attacks. This allows you to get some value out of the level-up heal that would otherwise be missed.

Another strategy is to use

PISORF and knock the boss through walls. Suggested races for this strategy are gnome or orc.