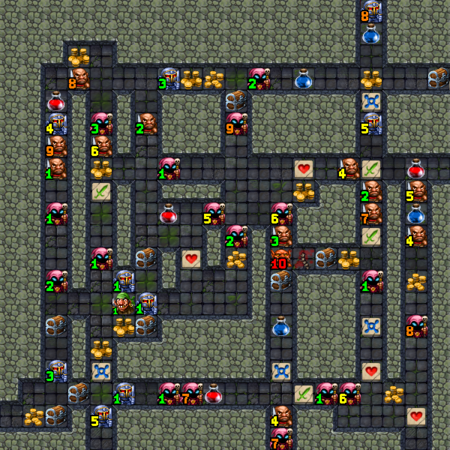 The Deadly Shadows dungeon is the

Thief gold challenge. The boss is a unique

You start out with the

Balanced Dagger that you won in the last Thief challenge. No altars, no shops. Gold piles are still present, as are stat boosters.

All monsters present are of unique types, present only in this level. Something to be thankful for.

All 3 monsters have the exact same stats, they only differ in their traits. Whenever you can avoid getting more stacks of Weakening/Corrosion than necessary.

Trapped chests are present, as they are for all Thief challenges. It is very important that you kill these as soon as you are able. Their contents are mostly helpful for surviving this dungeon.

Lord Karras Sillyname is a

Goblin, and he's pretty annoying. He has 120 attack and 150 health, and the trait

Retaliate: Fireball. His low health is his weakness though, he could be killed with physical attacks as soon as level 5.

The most important thing in this dungeon is to never bother fighting higher level monsters. The

Balanced Dagger rewards same level kills with +2 XP, so fighting 1 level higher monsters is pointless and gives no more benefit than fighting same-level monsters despite the higher difficulty, while 2 level higher ones would be too resource intensive and plague you with even more debuffs. Your only goal in the dungeon is to reach level 5-6 where you can already kill Sillyname with

GETINDARE. Fighting anything stronger or reaching higher levels is entirely pointless. The

BURNDAYRAZ glyph is just a red herring too - totally unneeded for the map.

The dungeon is composed of many narrow corridors, but the starting location usually branches out a little to give you options in choosing your targets and to let you pick up some boosters. Otherwise exploration is limited, due to monster density. If you can reach the level 1 trapped chest (contains

GETINDARE), it's great, but you won't really need it before the bossfight.

Start out by killing 2 level 1 Spellslingers. The level up will cure your poison and manaburn. Do not combat Mercenaries yet, if you can't find enough Spellslingers settle for Castle Guards. If you found some attack boosters you are able to oneshot the rest of the level 1s, which can help clearing out hallways or avoid level 2 Mercenaries if you have nothing else. In the early game always try to fight same level Castle Guards and before the levelup take out a Spellslinger.

Weakened is bad because even a few levels can make you need to hit the enemy 1 more times, which hurts more than some doses of Trait: Corroded Corroded and also results in you taking more debuffs. It hinders you in opening the trapped chests too. Only start taking points of weakening once you obtained your first

Fortitude Tonic and your corrosion level is getting out of hand. The fact that

Burn Salve potions are locked in weaker trapped chests is another reason to favor getting corroded.

Sometimes you will want to fight a Mercenary just because it blocks your path. But remember, if you can overlevel it you could 1 shot it later. Any time your current selection of monsters is awful, you can make some xp by slaying popcorn or later by using

IMAWAL. When you know your last kill is going to be a Spellslinger, you might as well kill some other weaker Spellslingers too.

As you progress in the dungeon look for the chests with the glyphs.

GETINDARE will let you take 1 less hit from enemies so you build up corrosion/weakening slower.

IMAWAL provides bonus xp to ease leveling and reduce the number of monsters you have to kill. Petrify anything over level 6 and Spellslingers of level 1-2. Be careful not to block yourself.

Of all the glyphs,

ENDISWAL is the most important. It will open up corridors, stack resistances to let you open high level chests sooner, and is essential for the bossfight! It even helps you use

By the time you get

BURNDAYRAZ you're already level 5-6 and ready to kill the boss. He has

Retaliate: Fireball, so the best you can do with it is converting it for extra attack.

The other half of the chests contain either Fortitude Potions or Burn Salves, and you should expect to pick up 2 of each throughout this dungeon. While you might be tempted to use them right away, keep in mind that there is no way to get more of them, and two-thirds of the monsters in this level have either the

Corrosive traits. Try to conserve one of each type until you move on to tackling Sillyname. Before you drink a

Burn Salve, clear all the acid pools from the ground, so you don't step on them accidentally later.

The level 7 chest has a

Pendant of Health inside. Comes too late to be impactful, at least it boosts the healing power of your potions.

GETINDARE, i.e. at around level 5. Use

ENDISWAL to obtain enough physical resistance to survive one blow, attack him, heal up with potions, repeat once or twice then deal the finishing blow via

GETINDARE. At level 5 it takes several potions and you will hit him 4 times total. Leveling up to reach 6 is great, because you only need 3 hits now, and only have to consume 2 manapotions to pull it off. You could kill Sillyname within 2 hits as well (so no potion has to be drank), but that takes reaching level 8 and killing a lot more monsters. These all assume you have 0 stacks of

Weakened, picked up all the boosters and converted the useless glyphs before bossfight.

Fabulous Treasure which is lockerable. Don't forget to pick it up! It costs 95 gold, meaning that if you prep it in a run and transmute it with

Transmutation Seal, you will have 95 more gold to play with.