Difference between revisions of "Dragon Isles" 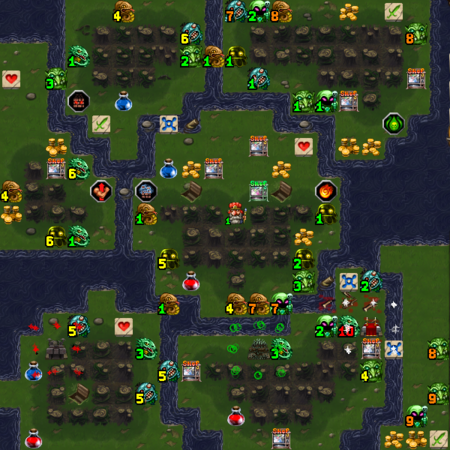 The Lair is a narrow corridor that starts with two Dragon Guards flanking a wall that vanishes if they're defeated, followed by four Dragon Elites and finally the Matron of Flame.

After the interminable curse-corrosion-weaken trifectas of most Vicious dungeons, this is a fresh breath of air. Prefer HALPMEH to PISORF or BURNDAYRAZ, as there are no walls and the Matron retaliates. The final gauntlet can be bypassed with a single use of a wall-breaking ability and WEYTWUT to leap over the other four enemies. Or if you make it to level 10 and have WONAFYT, you can summon the Matron to you after destroying the wall or killing one guard.

Assassin - Play competently enough to reach level 10 in the main dungeon (A Balanced Dagger, the Goblin race or worship Dracul/Tikki Tooki may be useful); this will allow you to make short work of the Matron's escort and handle her as you would handle a slightly lighter-weight Super Meat Man.

Priest - If you already have the Naga Cauldron from the Naga City, you can see just how much HP a Halfling Priest can accumulate. A Trisword helps too. If possible, limit resource use with the Firstborn by using APHEELSIK.