Difference between revisions of "Vicious Gaan-Telet" 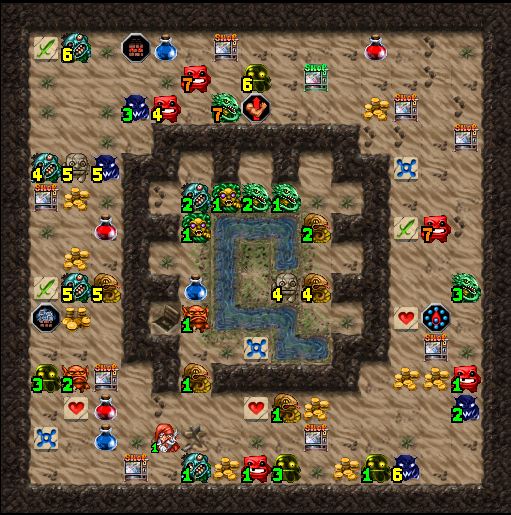 Vicious Gaan-Talet is the ultimate dungeon in Desktop Dungeons. It is a souped-up version of the Tower of Gaan-Telet, and is unlocked by completing the Oh, Horatio! quest.

The dungeon will host all unlocked basic monsters (as well as some special monsters, see below). Monster difficulty on the courtyard (main map) is 100%.

If you prepare the Vicious Token, it will overwrite all of these monster stat bonuses with the usual +60% Attack / +100% Health, making the courtyard and the earlier towers significantly more difficult; but later towers not necessarily so. Horatio only gets the attack boost, his health remains unaltered even with the Vicious Token.

The final boss is the

Goat-shaped Horatio the Immortal. Despite his form, he does a relatively modest 75 damage; however, he has 5000 HP, Physical and Magical restances of 50%, and Berserks at 50%.

The stairs to the first tower subdungeon are accessible from the start. However, in order for the stairs of the next tower to be revealed, all five monsters must be defeated in the previous tower.

Each of the nine altars are accessible once the stairs to its respective tower is revealed. Any altars prepared (or granted by the Martyr ability) appear in the courtyard as an extra copy of the given altar. Furthermore, a special copy of the currently worshipped altar spawns close to the tower entrance. So it is possible to have up to three copies of the same altar. Any deities not yet unlocked will not spawn an altar (their tower will still show up, just without the altar).

Unlike the Hard version of the dungeon, the Vicious version has all 9 towers; and each must be cleared to access the tenth tower where Horatio resides.

Each subdungeon is a small level, initially unexplored, containing several tough monsters (one of which is exotic), an altar, and a exotic, useful item. This means that every unlocked altar will eventually be available. To make life even harder, most levels will give you some kind of penalty when you first enter. (A few, including the first, do not.) You can travel freely between the current subdungeon, previous subdungeons, and the exterior.

The first, second, and third subdungeons contain monsters of level 8, 9, and 10, respectively. The 10th level monsters are not bosses, simply scaled-up monsters (for instance, the 10th level Goo Blob has Physical Resistance of only 50%, not 75%). Subdungeons 4-9 also have 10th-level monsters; on each level, the monsters get a progressively larger Health and Attack bonus.

There are also (up to) three subdungeons that do not give any penalty. So there are a possible 10 penalty events (the 7 penalties and 3 no penalty results), and one is chosen for each tower. Which means that in a lucky case, one of the penalties listed above will not be encountered. The first subdungeon will always have a "no penalty" event.

So all things considered, Vicious Gaan-Telet is an endurance run that requires you to be able to defeat lots of very tough monsters with very limited resrouces and several malicious afflictions. So most successful builds will have high

The recommended races are

Orc. These races allow you to boost your damage, which is essential to reducing the number of hits you need to take from monsters. Race: Dwarves Dwarves]] can also work for some builds, though are generally more difficult to play. Unfortunately the other races don't have much to offer in this endurance environment.

The easiest class to beat Vicious Gaan-Telet with is the

Vampire. Other good picks include the

Crusader who can ignore a lot of the malicious afflictions; and the

The best deities to worship in Vicious Gaan-Telet are:

A successful VGT run can easily use all four of these deities (for example, starting in Taurog for his resistance/damage boosts; then tripping through Glowing Guardian for Humility; then ending up in Dracul for Blood Shield and Blood Tithe; and taking Body Pact when needed for extra resists).

An honorable mentions is

Binlor Ironshield, who can function as a generous source of piety, and can therefor be used in conjunction with the Pactmaker to build a high level of resistances. This is the recommended approach for the

Rat Monarch, who finds it difficult to keep a lot of resistance-increasing items in their inventory.

Some items to keep an eye out for in Vicious Gaan-Telet:

Other than these, items that give a good conversion value can become useful purchases.

Most glyphs will end up being converted thanks to the shortage of inventory space, and the need for extra damage. There are some glyphs that can be very useful, though, and picking the right glyphs to keep can mean the difference between victory and defeat.

Most other glyphs can be converted on sight. Keep in mind though that different characters may also find some other glyphs useful. Builds relying heavily on Knockback would benefit from keeping

WEYTWUT; builds that require lots of blackspace could access a few extra tiles with

[1] : a useful online tool to track the floors, monsters and penalties of Vicious Gaan-Telet