Difference between revisions of "D.E.R.P." 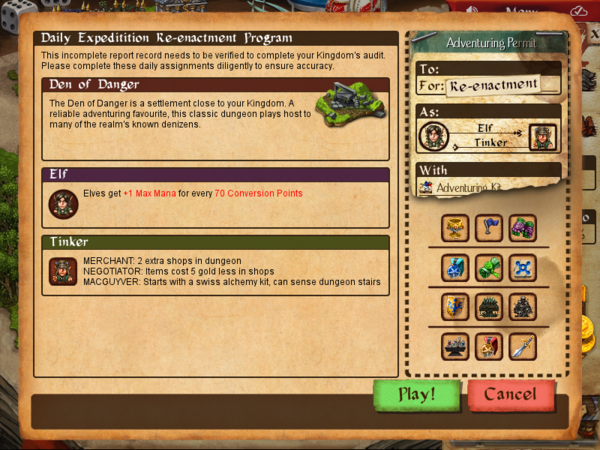 The D.E.R.P. becomes accessible by unlocking the Audit Zeppelin in a Kingdom. After the Audit Zeppelin is unlocked, it shows individual statistics, as well as allows access to the daily D.E.R.P. challenges and to the Leaderboard. The D.E.R.P. can also be accessed from the main splash screen without loading any of the kingdoms; any gold award received for completing the daily challenge will be added to the most recently played Kingdom's treasury. The daily challenge resets at midnight GMT, and although runs may be attempted even just before the cut-over, any run not finished and reported before midnight will mess up the results for the given day. Each D.E.R.P. can only be attempted once, and the game communicates with the Daily Servers when the daily is started; and when the daily is finished. If the connectivity fails, the server may not acknowledge completion of a given daily, or it may not allow the attempt altogether.

D.E.R.P. selects a random map, and a random class/race combination; as well as offers four choices of preparations, each selectable from a set of three. The map can be any Normal or Hard map except for Tower of Gaan-Telet; the class/race combination can be anything (including monster classes; the Enhanced Edition Chemist and Rat Monarch classes; and the Goatperson is also playable this way, even though it is normally only available as part of the Goatperson DLC). The preparations can be almost anything that are available from fully upgraded kingdom buildings. What makes the preparations very unique is that some of the normal rules governing preparation choice do not apply. For example, it is often possible to prepare multiple preparations from the same building (that are mutually exclusive during normal dungeon runs). Items that are normally very rare in shops, such as

In addition to the level, class, race, and available preparations being seeded random, it is also the case that the random stores, glyphs, monsters, subdungeons, and altars are seeded random. This means that which gods you get is randomly decided for everyone once and for all when the D.E.R.P. is generated by the host server. If you read about someone else's run, your run will have the same gods, monsters, etc. The extra/removed glyph from more/fewer glyphs will be the same, the item swap from Quest/Elite Items will be the same, Conjunction will add the same god, and prepared altars will remove the same god (if the prepared god wasn't already present). A spoiler-free run will leave the player at a mild disadvantage, but every D.E.R.P. is winnable regardless and many players are eager to discuss their findings in the forums.

The D.E.R.P. resets at Midnight GMT. Any ongoing attempts that have not yet completed at this time are counted as losses.

Because the D.E.R.P. allows combinations of preparations that are usually illegal, there are a number of unique interactions and approaches available to players here:

Attempting to build a long streak is only one of the ways to compete in the daily; many players pursue other challenges over and above merely winning the dungeon. Here are some common exploits:

It's possible to pursue a combination of these, producing an overall impressive entry even if you're not the best in any one category. Sometimes players do unique things that don't appear on the score-screen. If you do something cool, why not share it with the Desktop Dungeons community?

Each D.E.R.P. can only be attempted once. Since the primary overall player ranking metric is the current win streak, a lot of players lean towards the "safe" options when playing. Since the D.E.R.P. never selects vicious dungeons or Gaan-Telet, none of the dungeons in rotations require exceptional endurance. As a result, reliability is favored over power, and short-term boosts are favored over long-term boosts.

The preparations system for D.E.R.P. is extremely double-edged. While you might get multiple Elite items or rare gems like

Dragon Heart, the choice of preparations lacks reliability. For example, the

Bear Mace is highly unlikely to spawn as a prep, and the only other possible source is a subdungeon.

Monk can't depend on having

If you're looking to maintain a win streak, practice some of the trickier classes. You can also cancel out of a D.E.R.P. on the preparation select page and return later, allowing some time for practice runs.

Goatperson - No goat is ever safe! Pick as many early-game preps as possible, and thank your lucky stars if you get to start out with

Amulet of Yendor. Kill popcorn early and often for food, and leave a glyph or three on the ground for CP. Pay attention to god rotations and avoid punishments.

Rat Monarch - Practice this class without

Bear Mace. Be ready to use gods to the fullest.

Chemist - Aside from being one of the newest classes, Health Form and Mana Form are devilishly tricky and turn end-game planning on its head. Be on the lookout for gods with refills; if there are none, you will want to achieve the highest XP level manageable with a level-up heal and some blackspace left over. Always remember that potions are largely expendable.

Vampire - Another sophisticated class. He depends greatly on blood cows and defensive stats.

The default sorting order of the daily leaderboard is fastest time, making it one of the more competitive metrics.

One of the most common challenges, Most Experience has a very different playstyle than fastest time. Where the former requires rapid exploration and targeting non-ideal enemies to keep pace, Most Experience requires you to carefully take your time and find the ideal enemies to maximize bonus experience. As a result, fast times usually perform poorly in the experience category and vice-versa. If you are pursuing one of these, you should decide which one before you begin the dungeon run.

The third column, damage, has the fewest number of competitors. However, there are still a few who compete in this category and produce impressive scores.

An unofficial challenge, sorting by least experience is difficult to read since losing runs may be sorted above winning runs (and obviously suiciding at the 1st level is unimpressive). However, there are a small number of players who sometimes do compete for this metric, and it's surprisingly difficult to get. Least experience requires absolute minimalism, taking down the boss at a low level. Because many of their approaches are similar, it is possible to pursue both low experience and fast time simultaneously. Least experience is usually regarded as redundant with least damage, since with few exceptions gaining experience requires dealing damage to monsters.

One of the biggest challenges with a least experience run is that the boss(es) will award a large amount of bonus experience for having killed them. Using deity boons to increase your level can counter-act this, as the level increase provided by

Dracul do not count towards your total XP earned. This allows you to earn less bonus experience from killing the boss, making these gods absolutely mandatory for a lowest experience score.

Sometimes on particularly easy dailies players will achieve the absolute theoretical minimum possible experience. This, intriguingly, makes lowest experience the only metric where it's realistically possible to hit the theoretical "best" possible score. Below is a description of how to get the lowest possible experience in order to compete. The amount may vary depending on whether Dracul, Jehora Jeheyu, or both are present in the dungeon. The numbers are also slightly different for a

Fighter due to the class having a modified XP table.

This approach is the same for the Fighter, but with slightly different values due to his different progression tables. You only require 13 experience rather than 15 to reach 3rd level, but you also gain 1 extra experience point when killing the boss. As a result, the Fighter's minimum experience is exactly 1 point lower than for the other classes in every case presented here.

In this case, your approach differs slightly based on the deity availability.

If either Dracul or Jehora Jeheyu are present, then the lowest possible experience is 86. Again, kill 30 XP worth of monsters to reach 4th level then activate your boon to reach 5th level. Slaying the boss will grant you 32 experience, raising you to 6th level with change. Then kill the second boss for 24 experience.

If both deities are present, then the lowest possible experience is 71. Kill exactly 5 XP worth of monsters to reach 2nd level, then activate both boons to promote to 4th level. Slaying the boss will grant you 42 experience, taking you to 6th level, then slaying the second boss awards 24 experience.

The approach with the Fighter is very similar regardless of which deities are available. Gain 13 experience to reach 3rd level. Activate any boons available to increase your level prior to fighting the first boss. Regardless of which combination (if any) of boons you used you will end up as a 6th level character after killing the first boss and should proceed to immediately slay the second boss. If neither god is available then this results in a minimum possible experience of 93, if only one is available your minimum is 81, and if both are available and used the minimum is 71.

If neither JJ nor Dracul are available, then the lowest possible experience is 123. This works almost identically to the 2-boss scenario. Slay 6 additional XP worth of monsters after killing the second boss (reaching 7th level) then slay the final boss for 18 experience, totally 123.

Every D.E.R.P. to date has been winnable, with at least some players winning. However, a few have been notorious for their high difficulty or deadly traps.

March 14th 2015 - Half-Dragon in Magma Mines The Half-Dragon runs into a problem with the magic-immune boss in this dungeon. His regular attack deals magic damage, and his only way to deal physical damage is with knockback. Normally this is only an inconvenience, but if the boss happens to be cornered by impassible tiles he can't be knocked back into anything, and knocking things into him can't deal a killing blow! While people who prepared Taurog were able to force him to move due to his cowardly trait, and some people figured out that the WHUPAZ potion can be used to deliver 1 point of damage after he has been sufficiently weakened to finish him, most people were faced with a situation that couldn't be won by any conventional means.

May 14th 2015 - Rat Monarch in Shifting Passages The second highest mortality rate of any D.E.R.P. to date, only 8 players won this difficult dungeon. The randomized boss was Bleaty, which proved difficult for the Rat Monarch to actually land a hit against. Part of the difficulty was that the Enhanced Edition was relatively new, so players had not yet had much time to become accustomed to the Rat Monarch and Shifting Passages is one of the most difficult dungeons in rotation.

September 3rd 2015 - Goatperson in Rock Garden The highest mortality rate of any D.E.R.P. to date, only 7 players won this difficult dungeon. There were very few monsters close to the entrance, however each corridor was blocked by plants. Initial piety generation was very difficult. Since Earthmother was one of the (non-replacable) altars, most players had to endure at least one of her punishments for clearing one of the corridors; players who did not prep the Wicked Guitar had to endure another. Most players simply starved to death on this one. Those few players who have won this DERP are believed to have read the spoilers posted on the qcfdesign forums.