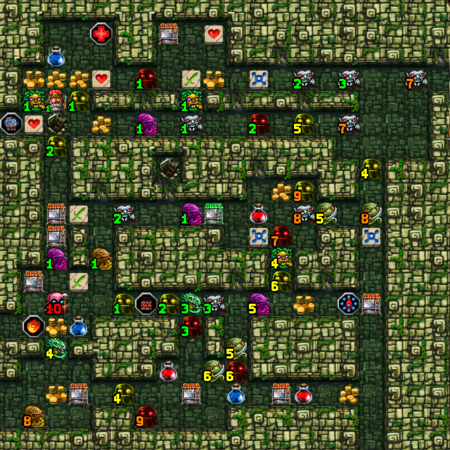 Regen-fighting is the word here. Poison is useful, as are mid-battle level-ups using the corner enemies. The piece de résistance in the boss gauntlet is usually the Tower of Goo and its 75% physical resistance: you'll need to either save a lot of mana for this battle, or bring a lot of resistance erosion to it. If it's not him it'll be Frank the Zombie, who has high stats and is immune to poison. For pure caster builds it's The Iron Man with his 75% magic resistance.

Tikki Tooki in the clean up phase to get poison, then convert to

Mystera Annur for the Arena. Use poison to kill all of the bosses without special strategies and follow directions for the ones that do. Convert to the

Dracul for extra HP and/or mana after you run out of potions.

Glowing Guardian - Prepare Glowing Guardian, attack bonus increasers, Patches, and an item that either provides high attack bonus or high conversion rate. Buy and convert all possible items you won't use later (using bonus potions to get an early level catapult), use

Absolution ~5 times for some bonus HP. The objective is to get base damage to achievement levels (150+); this makes poisonless regen-fighting a doable strategy.

Half-Dragon - After enough item conversions, the half-dragon can do even more damage per strike than an orc rogue, without HP difficulties, and easily kills bosses with physical or magic resistance. Hit the bosses into each other, or into other enemies; try to hit low damage bosses into high-damage ones to get a head start. Prep the Dragon Shield and do anything that raises resists or base damage, and convert everything you don't need. Prep Binlor (for piety farming, knockback bonus and a bit of magic resist), Dracul (for

Blood Shield mostly, though all of his boons will do you a bit of good), or

Taurog (for resists and piety farming); if you don't worship

Dracul switch to him in the arena for

Gorgon - You have to beat the level 3 times to unlock the gorgon, but her incredible ability at regen-fighting makes her extremely suited to beating it again. Worship Binlor while leveling up to farm piety and magic resist, and switch to Dracul in the arena for even more resists.