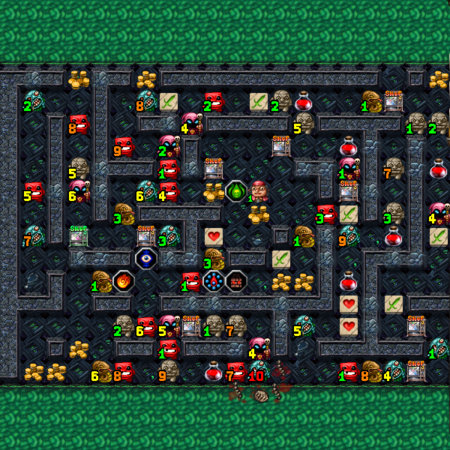 The Evil Zombie dungeon is the

Priest silver challenge. It's a unique maze-like dungeon with roughly 30% water at the top and bottom edges.

The dungeon will always have the

LEMMISI and the normally fixed

BURNDAYRAZ glyphs, and has regular shops. There are no subdungeons or altars.

The boss is Mister Evil (

The recommended race is the

Halfling. Mister Evil has a lot of health, and does enough damage to prevent most characters from surviving two hits. Playing as a

Halfling Priest allows for 6+ extra Health Potions, which should be just enough to defeat the boss as of level 8 or so. The challenge could also be possible with a

Dwarf, however this character needs to build up at least 211 Health (or sport physical resistance) to survive two hits from the boss, to compensate for the lower amount of Health Potions available. Since - barring a lucky store selection - this requires Level 9 or 10, while the Halfling can win at Level 8 or 9, this makes the Dwarf play riskier.