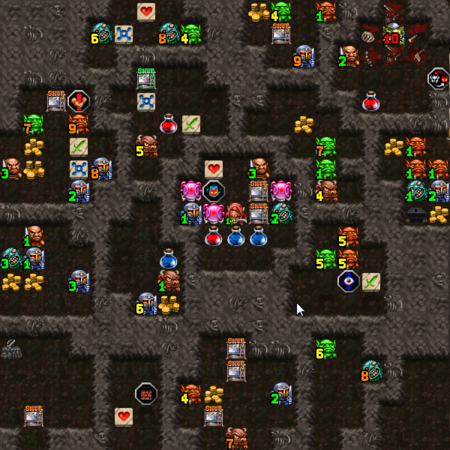 Wall Crunchers. Certain enemies will drop more. These items are essential for navigating the dungeon, unless one is lucky enough to find

Binlor Ironshield in the first room.

This dungeon is a series of rooms(though caves would be more accurate) that are completely sealed off from one another.

ENDISWAL are required to navigate this dungeon. This natural obstacle makes life regeneration difficult, as one might find themselves in a small chamber with very few tiles to explore.

The dungeon has a guaranteed altar to

Tikki Tooki, and may have altars to

It is recommended to play either as an

Orc Rogue or as a

Dwarf Rogue. Each will require slightly different boss fight tactics. Other races may be more challenging, but probably nevertheless feasible with the right tactic (except, perhaps, the

The Pactmaker. In essence these other altars serve the same purpose: to give you extra piety. The level is easier if you get

Binlor Ironshield, but still possible with

The Pactmaker. Resist the urge to pick the

Warrior's Pact (or any other pact for that matter).

Once you have explored the dungeon completely, and killed all the higher-level monsters you can (you may end up having to spare some level 8 or 9 Animated Armors or Zombies), convert to Tikki Tooki and kill off the lower-level monsters you preserved until now (except one or two Goblins). This should gain you considerable Piety. If it nets you an extra level, consider picking up a level of

Reflexes). If you play an Orc, generally don't worry about leaving any monsters for a mid-fight level up, unless you have for example

CYDSTEPP. If you play a Dwarf, though, you should be able to build up enough Health to survive one hit from Yohoho, and in this case do save the last monster(s) for a level-up. If you did not find some means to gain Death Protection, it might make sense to leave a couple of low-level Goblins unslowed to cycle through the Quicksilver potion dodges. If you forgot to do so, try pushing another monster into a Goblin, this removes the slow from the second monster without killing it. If you are desperate, you can also pick up the

Scholar's Pact for the overheal effect, and then level up before the boss fight. This costs you precious 10

, but practically guarantees that you can survive a hit from Yohoho. Make sure you get

You will most likely need to get the Reflexes boon two or three times to beat Yohoho. If you converted out from Binlor, you should have 50 starting Piety, plus the amount you rack up from killing the weak monsters you left lying around, this will easily rack up another 50 Piety. You may also desecrate his altar to gain further 30

. If you did not get Binlor, but got The Pactmaker instead, use

Consensus at the right moment to gain (up to) 50

(ideally, use it when your Piety is closest to zero, because it sets your Piety at 50 irrespective of how much you had before). Then drink up, and start bashing Yohoho. Obviously, don't drink the Reflexes potion until you know that you can hit Yohoho, always start with the Quicksilver potion. Don't worry about angering Tikki Tooki at this point, if you have Death Protection, use it shamelessly, because Yohoho already has first strike, and the Weakening Blow doesn't make him significantly more dangerous. If you have

PISORF, you can push him around a bit, even using up your Mana Potions as needed to round up the damage. If you have

WEYTWUT, you can Slow him for a free killing blow.

Alternatively, you can do the challenge by sticking to Binlor. His

Stone Skin a very viable option. With a midfight level-up and potions, it shouldn't take more than three or four hits to kill him.